A Life-Size Version Of Lightyear’s Robot Cat Sox Can Be Yours, For Your Heisting Needs


This little guy is going to set you back though. He comes to us from Super7, which creates limited runs of various collectibles across a variety of brands and franchises. There is nothing specifically on the site about Sox being limited edition, but I wouldn’t be surprised if he sells out even though he costs $400. If you’re concerned about me saying “he” and not “it” for a toy, you should know that I still have my very first teddy bear and I call Teddy “he” as well.

Sox come with a “Property of Star Command” cat carrier with breathing holes, because he’s real, folks. I will hear nothing different. He’s got a faux leather collar with a real metal name tag and a mouse protocol robot with a glow-in-the-dark tail. He’s even going to feel pretty real, as he weighs 25.29 lb. He’s for ages 14 and up though, so maybe get your littles the plush version. They have one of those at Target for $29.99, and he’s really cute as well. Otherwise, you can order Super7’s Sox right here.

Here is the official info for you:

Sox the cat is Buzz Lightyear’s PCR – personal companion robot – and now he can be your pal, too! The Disney and Pixar’s Lightyear Supersize Sox premium vinyl figure is engineered to be truly “life-sized” and measures about 20″ long from nose to tail, and almost 15″ tall to the tip of his ears. Fully poseable and wearing a faux leather collar with real metal name tag, Sox is accompanied by his small mouse protocol robot with a glow-in-the-dark tail. This limited edition premium collectible comes packaged in a “Property of Star Command” cat carrier that you’re going to want to display too! 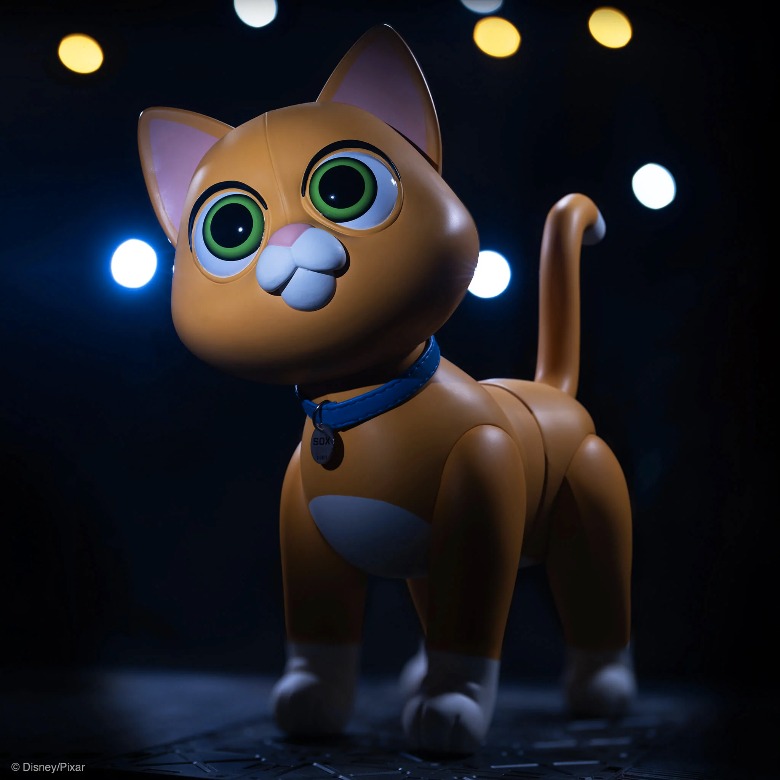 I don’t have an extra $400 lying around, but I really want one of these! Can I play with yours?