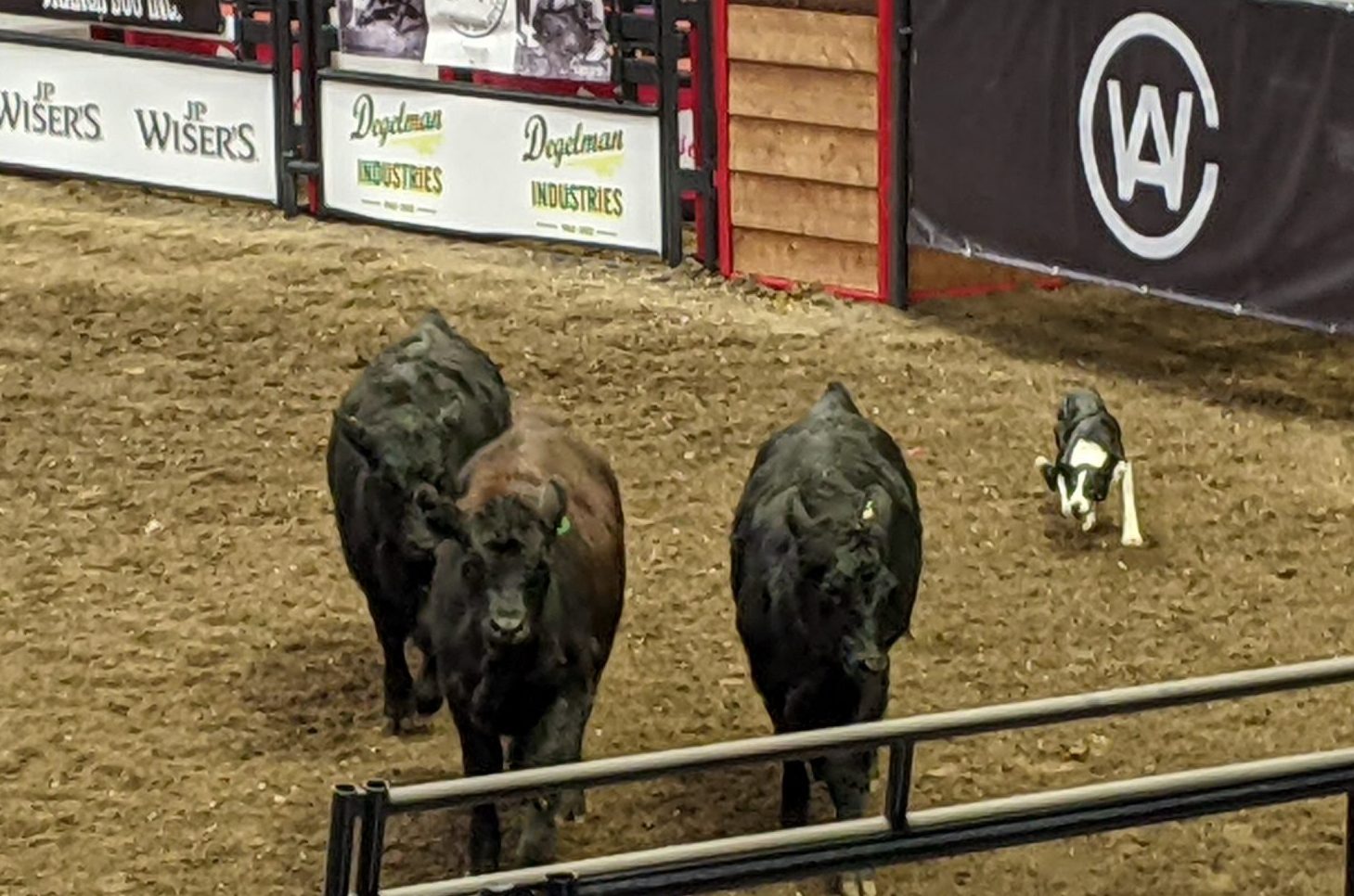 A new event has made its way to Canadian Western Agribition.

For the first time in Agribition’s 51 years, organizers have decided to hold what they call an open cattle dog competition.

The competition was open to anyone who wanted to participate and challenged dog owners to use their pet to herd small groups of cattle through various obstacles in five minutes or less.

Every obstacle the dog manoeuvres the herd through is worth a point.

In previous years, dogs have only been allowed to herd sheep at Agribition.

Art Unsworth from Maple Creek does the in-arena announcing for the competition. He says there was a lot of demand to organize an event like this.

“We’re pretty excited. Our waiting list of people wanting to enter into the competition is actually longer than the 25 (entries) that we took,” he explained Wednesday. “That’s how much interest there was in this.”

On Tuesday night during the inaugural competition, participants had to move three head of cattle within five minutes through the obstacles. The dogs with the best scores then moved into a five-dog final, where they each had to move five cattle into the gate.

Unsworth says it wasn’t surprising to see so much interest in this event.

“We were long overdue having an open cattle dog competition at Agribition. It’s a natural fit in the western prairies,” he said. “There’s truly more cattle in the prairies than there are sheep. (There’s) a lot of Border Collies being used on the farm, so there’s a lot of interest.”

People entered the competition all the way from B.C. and Wyoming.

Unsworth added the winning time for the competition on Tuesday night was two minutes 38 seconds.

He says Border Collies are used on the farm to help herd cattle because of their instincts.

“The Border Collie naturally gathers and moves stock,” he said. “What they do is they go out, they’ll gather the stock and return them to the handler. That’s the natural instinct of the Border Collie; it’s hardwired into them.”

Unsworth mentioned the real test of the competition is the interaction between the Border Collie and their owner.

“We always say when you’re handling livestock that going slower makes it faster,” he said. “What we mean by that is that if you push livestock hard, things usually don’t work out well. They usually explode and go in every wrong direction, so going slow and steady works better.”

But Unsworth pointed out the clock does still matter as you get points for finishing earlier.

“(There’s) a lot of skill and stockmanship, which is reading your stock as well as handling your dog at the same time,” he added.

Meet Butter, a dog that can potentially save its diabetic owner’s life