British man reveals the ONE word that gets him in trouble when attempting to pat a dog in Australia: ‘It’s so awkward every time’ 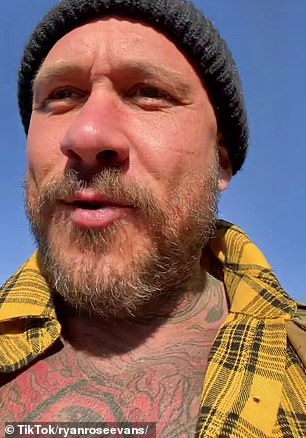 You should never ask an Australian if you can stroke their dog, according to one British expat, who learned the hard way to ask for a ‘pat’ instead

You should never ask an Australian if you can ‘stroke their dog’ according to a British expat who learned the hard way that he should ask to ‘pat’ instead.

Life coach Ryan Rose Evans, who moved to Australia four years ago, told his 26,000 TikTok followers that it surprised him to learn the word stroke had ‘sexual and creepy’ connotations in his adopted home.

‘In the UK when you want to stroke something, it means to like, stroke it,’ he said making a smooth patting motion.

‘Like you just would say “Can I stroke your dog”,’ he said.

‘In Australia stroking does not mean that. They call stroking a dog patting a dog.’

But it became apparent when women tightened their grips on their pooches that ‘stroking’ was out of the question.

The London lad was met with looks of outrage by many, with others correcting his word choice on the spot.

‘They look at you and then say ‘Yea mate, you can pat my dog’. No one wants their dog felt up or touched up in an inappropriate way at all,’ he laughed.

The short TikTok clip has been seen by more than 160,000 people with hundreds leaving their thoughts in the comments.

‘*Tightens grip on leash when you walk past me and my dog*,’ one woman wrote in the comments, earning over a thousand likes.

‘My dog just left the room,’ laughed another.

‘We would never stroke a dog. Haha that would be inappropriate,’ added a third.

Others said the word stroke never gets easer to hear for Australians.

‘I knew because my dad still says stroke the dog or stroke the err other word for cat. No you can’t say that, I can’t even type that,’ one woman wrote.

‘Have a blue’ – get into an argument

‘Give a bell’ – call someone

‘Shout’ – pay for someone

‘Dog’s breakfast’ – referring to a slapped up meal. Not thought out

‘She’ll be apples.’ – everything will be fine

‘Whoop whoop’ – someone far away from anywhere of note

‘Started laughing as soon as you said stroke,’ another said.

And it isn’t the only English word that gets lost in translation between the countries.

‘When I moved to England from Aus I told someone I was buggered…. Tired in my language, apparently not the same meaning,’ one woman laughed.

‘I have to say, the word ‘route’ has a whole new meaning over here too,’ said another Brit.