Can You Spot The Sleeping Cat Hidden in The Pile of Wood?


Viral Optical Illusion: Optical illusions and picture puzzles are a rage on the internet because they are fun to. solve. The internet is full of such mind-blowing and interesting optical illusion tests which reveal the various facets of your personality. Some also test your eye-sight, concentration level and attention to minute details. It’s interesting to note how some things are right there in front of you, yet it takes a long time to spot them. One such picture is going viral on social media that challenges people to spot a sleeping cat amid logs of wood. While some are able to spot it easily, others were left scratching their heads for a long time.Also Read – Viral Optical Illusion: Can You Find The Frog Hiding In This Photo Within 30 Seconds?

The picture first surfaced on Reddit where many users almost gave up. One user wrote, ”I gave up myself after looking at the picture for 20 minutes. Once you find it you wonder why it took so long. ” Another wrote, ”Wow. Before and after looking at the comments I thought this was a troll. But there is really a cat in full view with its head facing the camera. As a hint that doesn’t give away where it is exactly: think about the composition of the photo. Where would someone normally put the subject?”

Many could just see tall trees and pile of wood, but no sign of a cat! But when you take a closer look, you will be able to see a sleeping cat in that pile of wood.

Here’s the solution to the puzzle, in case you gave up:

The cat is sleeping on top of the second pile of wood near the fence. Can you see it now? 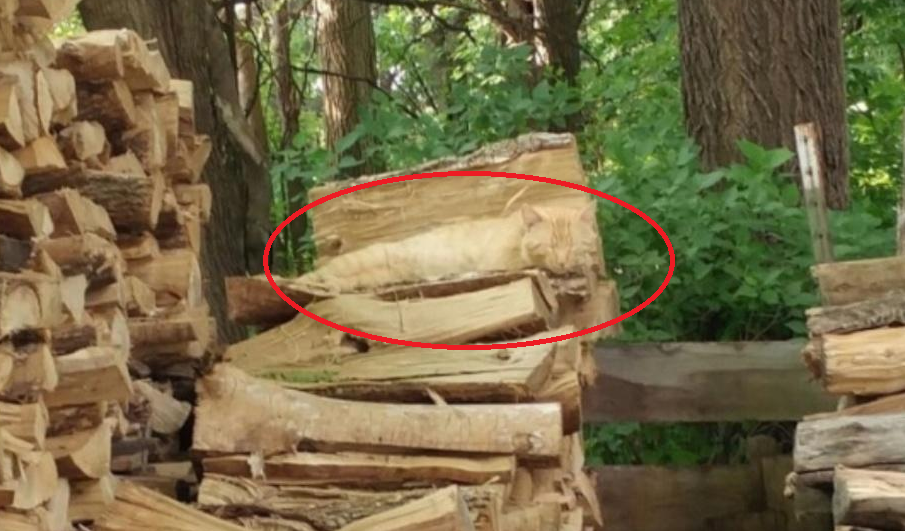 Cat In Heat: Signs, Symptoms, & What To Do If Your Cat Is In Heat

Can Cats Eat Popcorn? Is Popcorn Safe For Cats?

Is 'Cat Cuddler' the best job in the world? – Afternoons – ABC News

Is this the world’s shortest cat?