Cat Roaming the Streets Most His Life, Shows Up Outside a Window As He’s Ready for Change


A cat who had been roaming the streets for most of his life, showed up outside a window as he was ready for change.

An orange and white cat had been living on the streets of a neighborhood in Montreal, Canada for quite some time. Kind neighbors, Kurt and Mel, began feeding him and tried to look out for the elusive feline.

When harsh weather hit the area early this year, the cat wandered his way outside a family’s home, scrounging around for food and warm shelter. He climbed onto a window sill and tried to make himself known.

Marie-Pier was shocked to find the cat when she spotted his silhouette on her window. He was cold, haggard and hungry. 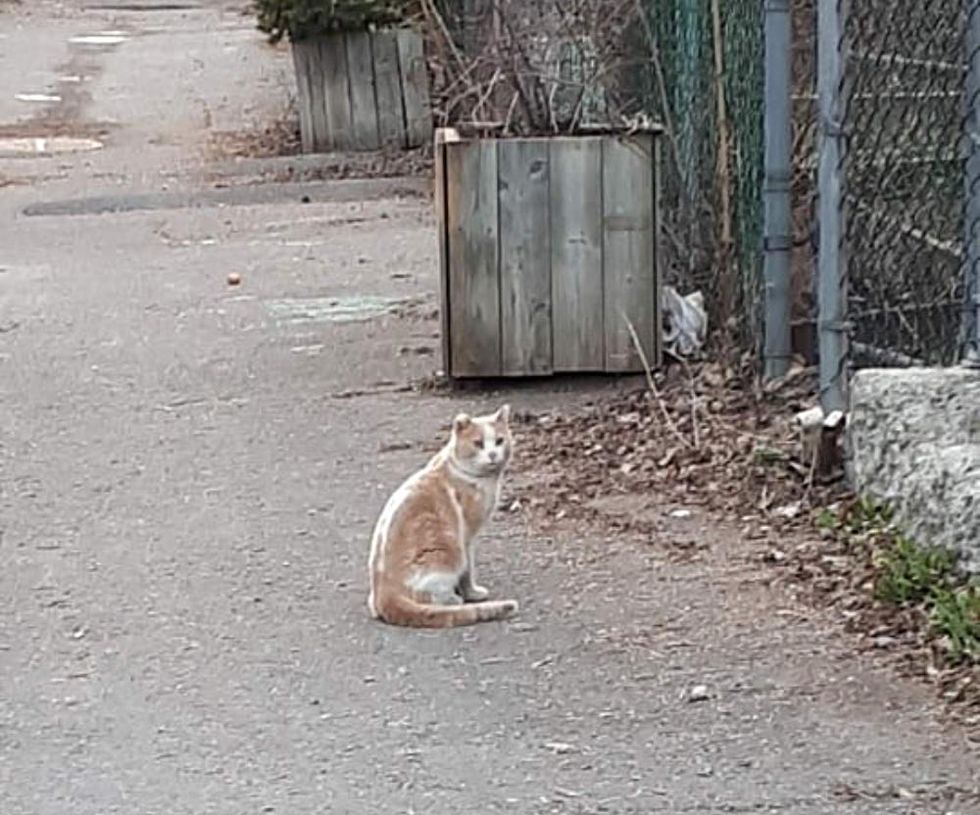 He was found wandering the streets of a neighborhoodChatons Orphelins Montréal

She noticed that his ears were damaged by frostbite, and he walked with a visible limp. Knowing that the cat needed help, she sprang into action and brought him safely inside.

“With the freezing temperatures, he wouldn’t have made it outside alone. She took him in and reached out to us for help,” Celine Crom of Chatons Orphelins Montréal shared with Love Meow. 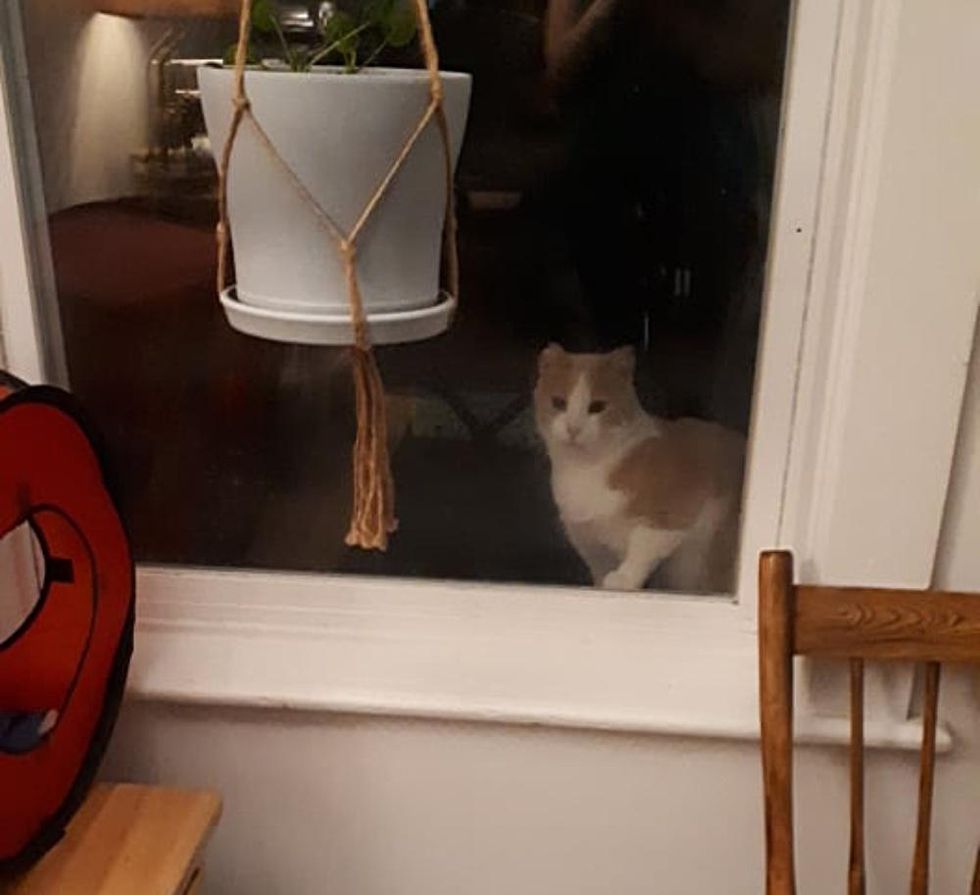 The cat was named Cheetos and estimated to be three years old. That night, he could finally relax with a full belly and rest up in a comfy, warm bed. “Cheetos had x-rays which showed that his hip had a fracture at the head of the femur. The little guy needed surgery as soon as possible,” Celine told Love Meow.

“He also tested positive for FIV (feline immunodeficiency virus), which wasn’t a surprise, considering that he had a difficult life in the outdoors.” 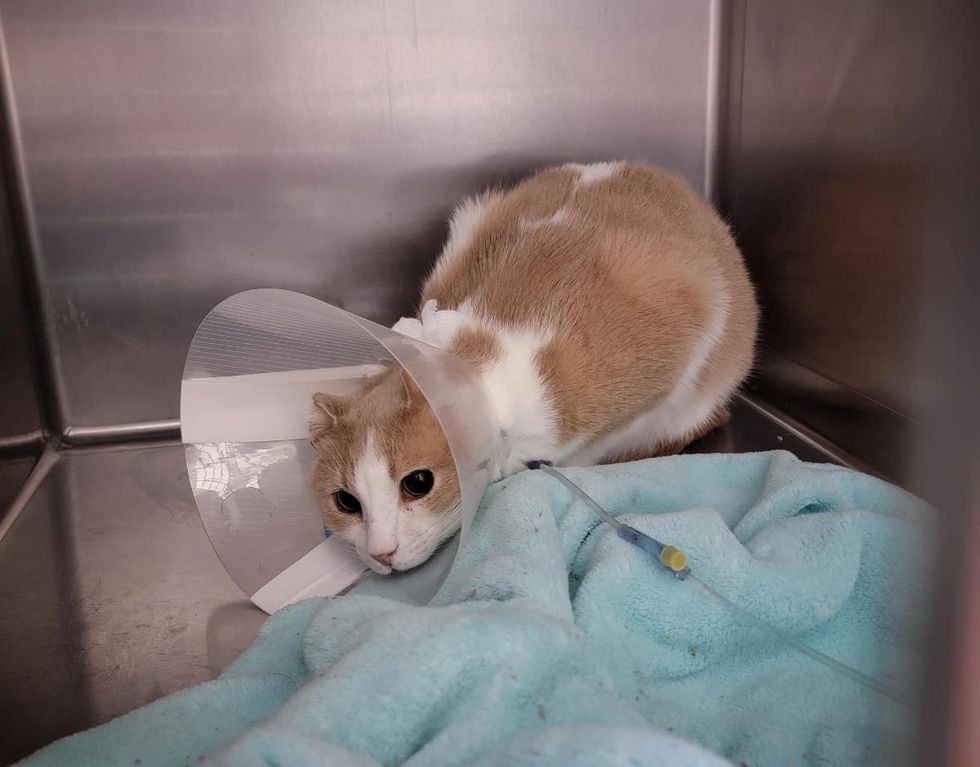 With the help of a wonderful veterinary team, his surgery was a success. Cheetos was sweet-natured throughout the entire process as if he knew they were helping him. Josh, a foster volunteer, took him home and continued to nurse him through his recovery.

While Cheetos was on crate rest, Josh kept him company and showered him with love and snuggles. The little guy quickly warmed up to his human and grew to relish the luxury of indoor life. 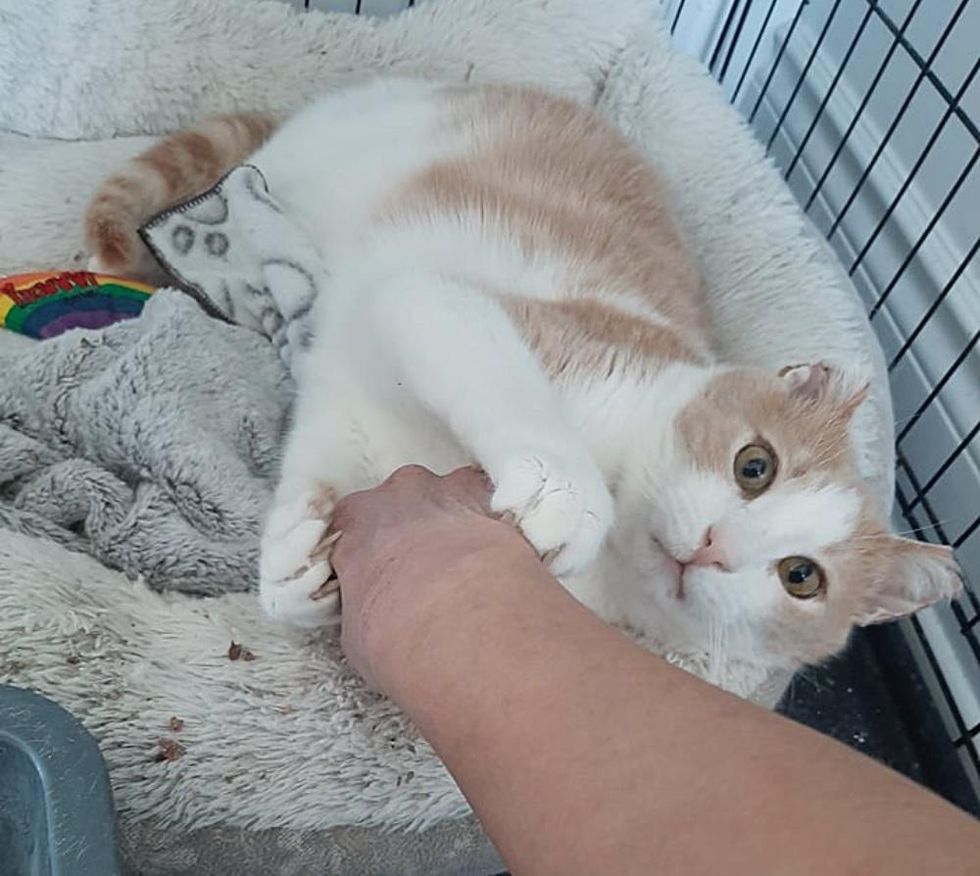 Each day, Cheetos made good strides and became more confident around people.

When he was strong enough to rise up on his feet and walk, Josh encouraged him to take his first steps outside the crate with his favorite treats and plenty of head scritches.

Watch Cheetos the cat in this cute video:

Cheetos was food motivated and followed the treat trail as he ventured out and explored the rest of the house.

“He’s discovered his love for catnip infused toys, which always bring out the kitten in him. He likes to stay in boxes and cabinets (his little caves) while he observes the world around him.” 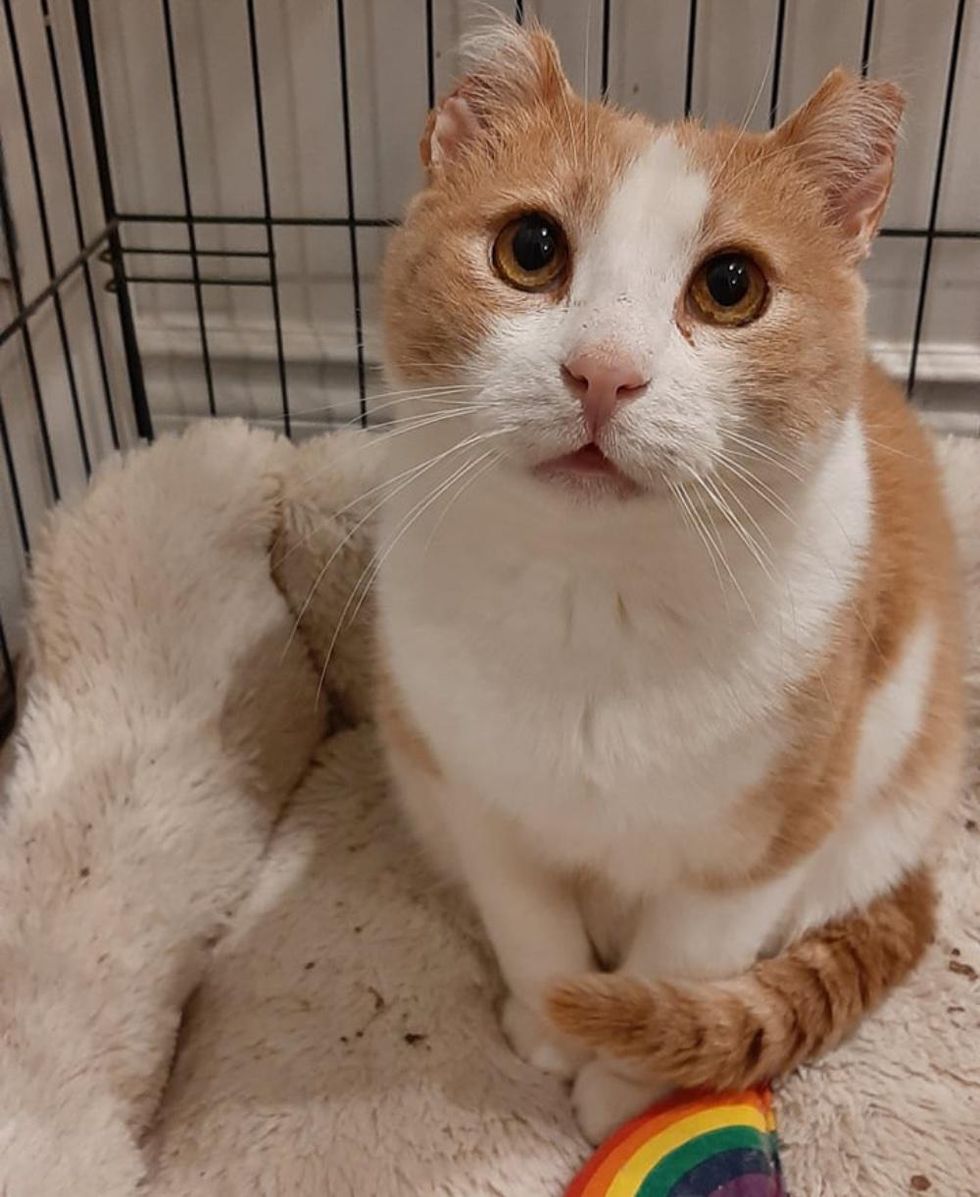 Cheetos has learned to have fun and play, and enjoy feline entertainment by the window—spying on squirrels while sunbathing. 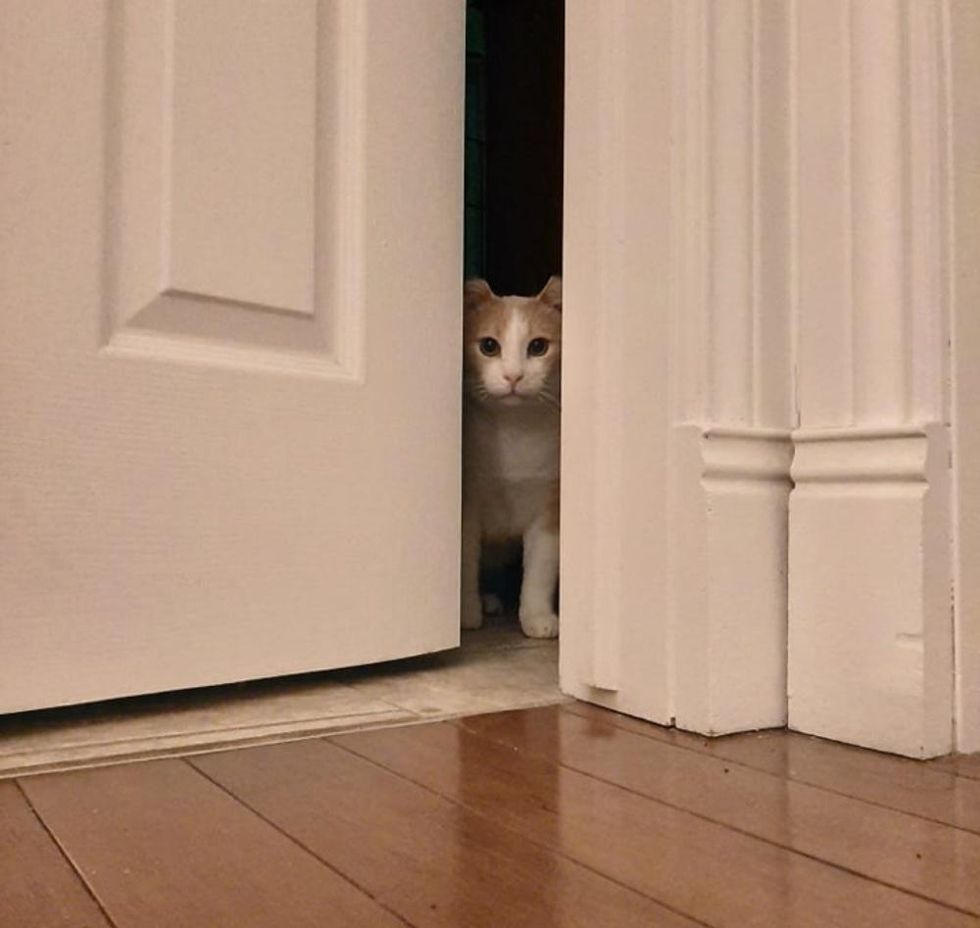 “He likes to cuddle and rub his face against his humans to show them trust,” Celine shared with Love Meow. “He is looking for a family that will give him the patience and time he needs to thrive.” 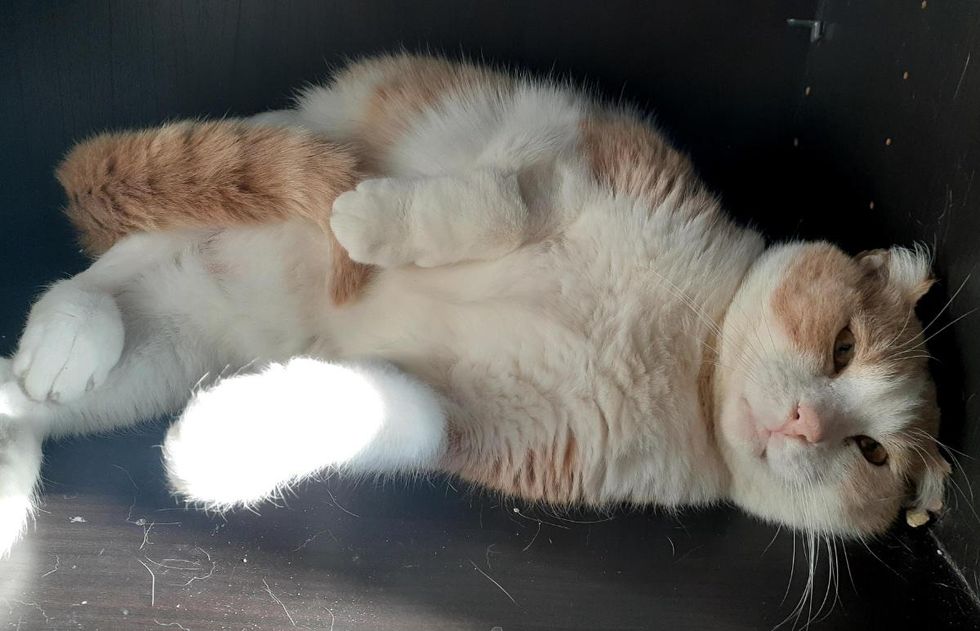 The former street cat has recovered fully and blossomed into a happy, playful teddy bear. He will never have to worry about the elements of the outdoors or fending for himself. Cheetos is living a purr-filled life and he couldn’t be happier. 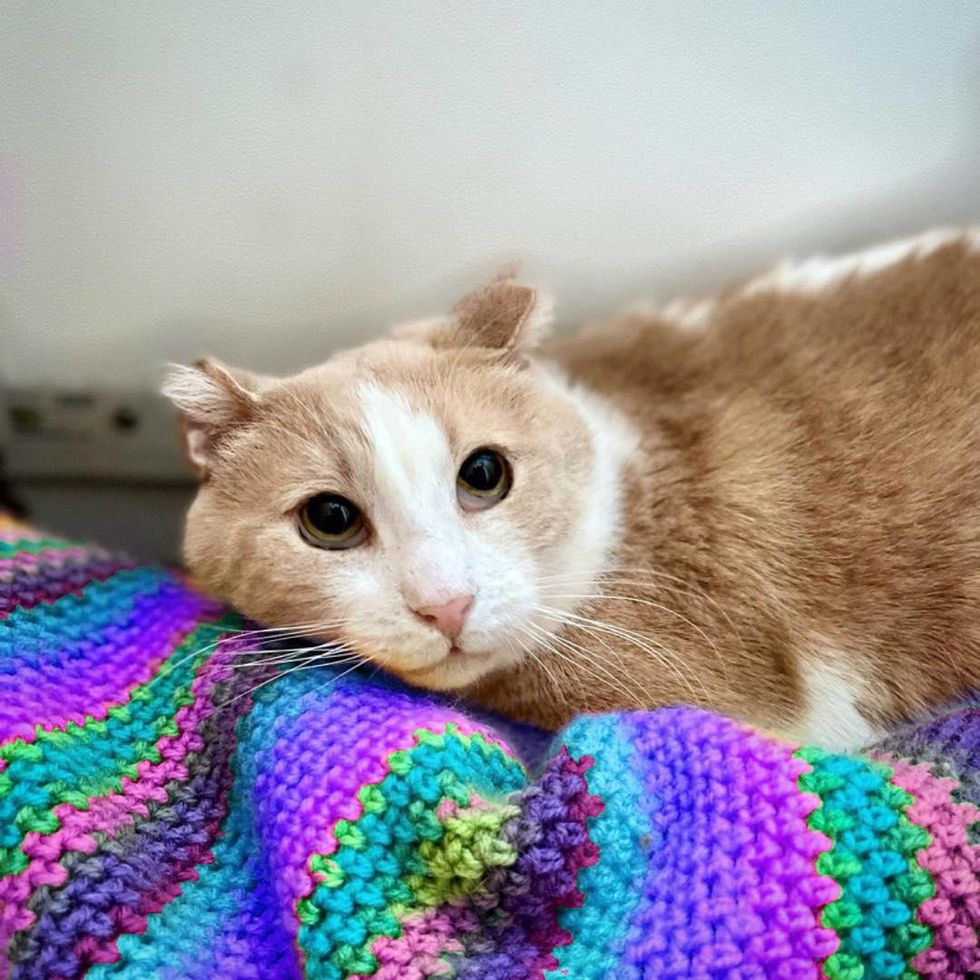 Related story: Two Kittens Wander Up to a House, Walk into Carriers and Ready to Leave the Streets Behind

Ask Jenny Ross: Should my husband put his £60,000 redundancy payout into a pension?

How To Make Your Cat More Comfortable In Your Home » TwistedSifter

If You’re Owned by a Cat, Scientists Want to Hear From You

Family Dog Reminds us All about Fire Safety New York