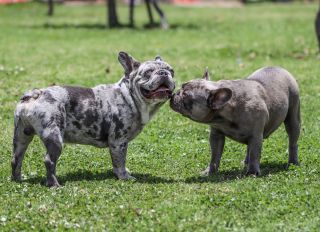 When dogs have flat, squashed faces (known as brachycephaly), many of them will have health issues and can even struggle to breathe. Now veterinarians at the World Small Animal Veterinary Association are alerting people to what they say is a “canine welfare crisis” because of how popular these breeds are.

Some of these dogs have very tiny nostrils or narrow windpipes; the eyes and teeth are also often affected. Although dogs with extremely flat faces can have many health issues as a result of their breeding, perhaps the biggest concern is BOAS (Brachycephalic Obstructive Airway Syndrome). This disorder means they cannot breathe properly, and as a result, many may need surgery or have a shortened lifespan.

Unfortunately, although many people notice that their brachycephalic dog makes a lot of snuffling, snorting, and snoring sounds or has to breathe through their mouth, they think it is “normal for the breed.” This means they don’t realize that their pet has a serious medical issue—and they may even find it “cute.”

In the video, Peter Sandøe, Director of the Centre for Companion Animal Welfare at the University of Copenhagen, says:

With French Bulldogs now the most popular breed in many countries and with English Bulldogs and Pugs also very popular, the number of affected dogs is increasing dramatically. Selective breeding for an exaggerated short nose has created dogs whose health, in many cases, is compromised for the sake of perceived ‘cuteness’. It is simply unethical to breed dogs which struggle to breathe.

Flat-Faced Dogs: A Problem for Many

The obvious solution is for breeders to stop breeding dogs with such extreme features. The WSAVA says that these dogs are so popular that in many countries, only a minority of puppies of these breeds are bred through a breeder who registers puppies with the relevant kennel club. This means the kennel clubs alone can’t make a difference (although, obviously, they can help). So the WSAVA is asking breeders, vets, journalists, and dog guardians to work together to solve the crisis.

Although BOAS is related to the dog’s conformation, it’s not possible to tell just from looking, exactly which dogs will have difficulty breathing and which ones won’t. Breeders can get a test of respiratory function for any dog they plan to breed from and should only breed from those who pass. WSAVA says that an alternative if such a test isn’t available, is to only breed from dogs if they are able to take a brisk walk for three minutes without having any issues with their breathing.

It’s a complex problem because of the many factors involved. Due to their popularity, brachycephalic breeds are often used in advertising, likely encouraging more people to get these breeds. In the UK, the British Veterinary Association has a campaign to get advertisers to stop using brachycephalic breeds. Another issue is that because selling puppies is a big business, in some cases, there are also criminal gangs involved, according to a recent BBC investigation in the UK. So sadly, some people breeding puppies don’t have the pups’ best interests at heart.

Tips for Choosing a Brachycephalic Breed

What about people who want a French Bulldog or other brachycephalic breed? One thing to look for is a breeder whose dogs have less extreme features. There is some variability in the snout length, and it’s best to avoid the flattest faces.

People should also ask about the health tests that have been done prior to breeding and find out which tests are recommended for that specific breed. In particular, when picking a brachycephalic puppy, make sure the parent dogs can both take that fast walk without issues. If the parents struggle to breathe, their puppies will likely too.

There are plenty of alternatives to the French Bulldog (and you can find some other tips on getting a puppy here). It’s also possible to find French Bulldogs and other brachycephalic breeds in shelter and rescue, though you will probably have to be quick when they become available.

I am sure dog guardians would agree with veterinarian Jane Ladlow of the BOAS Research Group at Cambridge Veterinary School, UK, when she says in the video,

“Dogs should be able to run outside without laboured breathing, eat without gasping for breath and sleep without obstructing.”