Former NFL player Derek Wolfe said he’s being harassed online after he killed a mountain lion that he claims were terrorizing a Colorado neighborhood.

Wolfe appeared on ‘Tucker Carlson Tonight’ Monday where he shared how he legally slaughtered the enormous cat with a bow and arrow, processed the meat, adding ‘I’m going to eat that cat’ and insisted he did everything ‘by the book.’

But after he proudly posted a photo of himself holding up the 195-pound carcass on Instagram, commenters were quick to criticize. He added that there have been over 200 calls to Parks and Wildlife to report him.

‘I can’t believe this is happening to me,’ he told Carlson, referring to the alleged harassment that he claimed he has been receiving for the legal hunt. 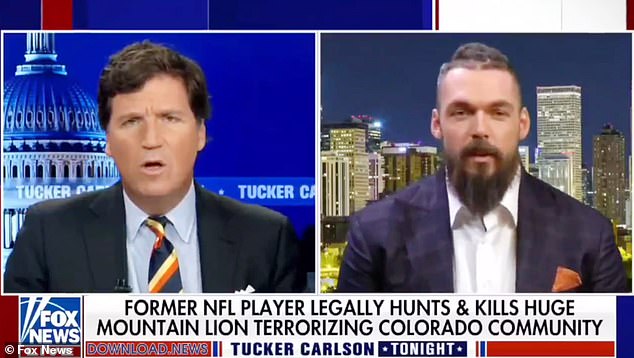 Wolfe shared how he legally slaughtered the enormous cat with a bow and arrow, processed the meat, adding ‘I’m going to eat that cat’ and insisted he did everything ‘by the book’

Wolfe revealed that he hunted and killed the lion using a bow and arrow – before falling ten feet off a rock face with the giant cat.

The former Denver Broncos defensive end previously said he had been asked to hunt the animal after it ‘wreaked havoc’ in a Colorado neighborhood, killing two dogs and a mule deer.

‘This was by the book,’ Wolfe told Carlson on the show Monday.

He continued with the story of the hunt which he said was a treacherous one.

‘I’ve been through some tough training camps but this but this beat me up bad. I’m all cut up,’ he added.

‘I was able to make a shot, a good ethical shot and harvested the cat and got him out of there and did everything by the book. This was completely legal.’

Wolfe said he got the meat processed, adding ‘I’m going to eat that cat.’

Despite the criticism, local authorities have confirmed to TMZ that he took all the necessary steps before hunting the lion and is in ‘good standing’ with the Colorado Parks and Wildlife agency.

According to Bowhunter Education, you must be at least 10 years old to take the online course, and do not need to specifically be a Colorado resident to be able to hunt in the state.

Wolfe said a woman from his neighborhood asked him to track down the mountain lion that was living under her porch.

It had already killed two of her dogs and she was ‘nervous what he might do next’.

Wolfe said after finding the dead deer he hiked over 9,600 feet up rough terrain to chase down the big cat and was ‘exhausted, dehydrated and cramping’.

However, he eventually found the animal and killed it with his bow and arrow. 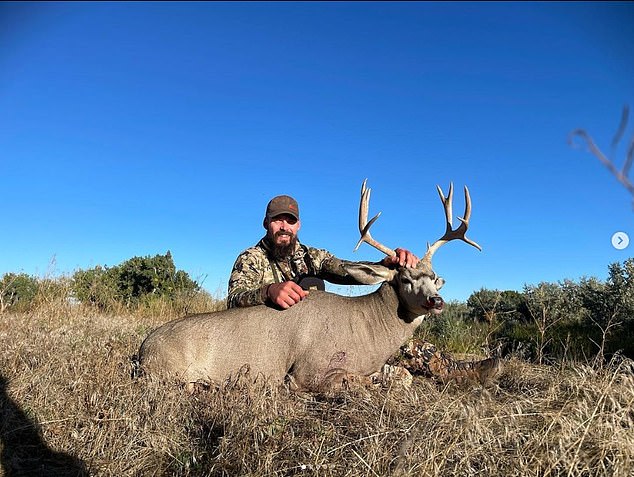 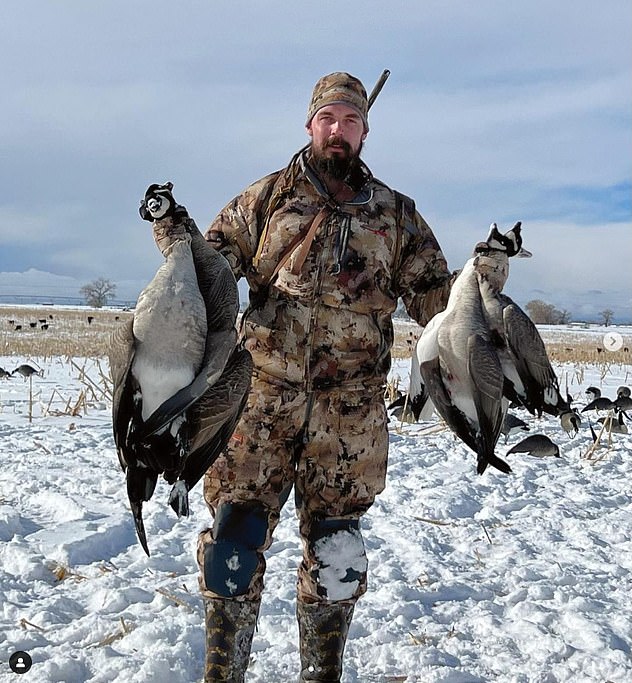 The lineman said he had to crawl backwards down the mountain, dragging the carcass with him, to get it back to his truck, falling 10 feet off a rock face in the process.

Wolfe shared a photo of him lifting up the carcass, which looked to at least match his six-foot-five frame and he estimated it ‘probably’ weighed 195 pounds.

The former NFL player regularly posts photos of his kills on his Instagram feed, and is a keen hunter and fisherman.

Wolfe played in the NFL between 2012 and 2021. He was a second-round pick, 36th overall, by Denver in the 2012 NFL Draft and spent eight seasons with the Broncos.

He played the 2020 season with the Baltimore Ravens before calling time on his career after an injury ruled him out of the 2021 season.

However, some social media users were not impressed with the catch, slamming him for the hunt. 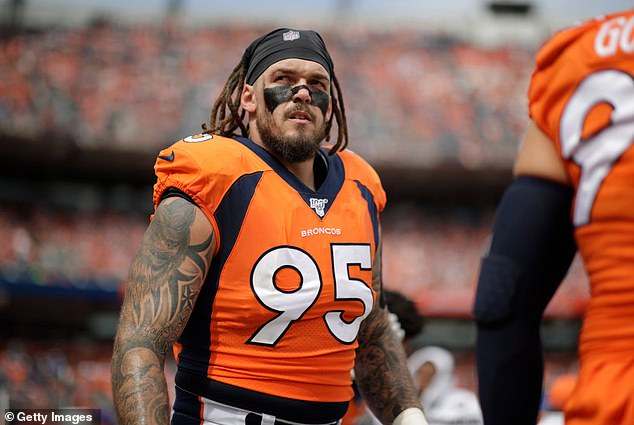 ‘Too bad the endangerment laws are not fully enforced in CO. And oh – keep your friggin dogs indoors at night.’

‘Grant is not a city. When you live in rural Colorado you sign up for living WITH wildlife,’ another claimed.

‘There are guidelines for NOT making your dogs a food source. Go back to Kentucky.’

One blasted Wolfe for posing with his kill, writing: ‘If it had to be done, I understand. No reason to pose with the corpse though.’

Some social media users were not impressed with the catch, slamming him for the hunt

Another added that he should be ashamed. saying: ‘Mountain lions don’t terrorize. They survive. Humans, like one of the most disappointing high draft choices of the Broncos terrorize. Shame on you for celebrating this.’

Others disagreed with Wolfe’s claims the mountain lion had been ‘terrorizing’ the neighborhood as one user branded it ‘ridiculous’.

They posted: ‘Terrorizing???? Or maybe because y’all encroached on it’s home and it was hungry!! Naw this ain’t it!! Smdh!! There aren’t enough to go around and they don’t repopulate like deer etc.. sooo try again.. THIS IS NOT A WIN MY FRIEND!! This is just ridiculous!!!’

Another suggested that Wolfe was the danger, not the big cat, sharing: ‘Ex-NFL player Derek Wolfe kills a mountain Lion in Colorado. I feel some type of way about this. These types are dangerous. The human not the lion. #AnimalCruelty’

Gardening: How to plant, grow and dry herbs for tea

After risky journey, migrant and his dog say goodbye at U.S. border