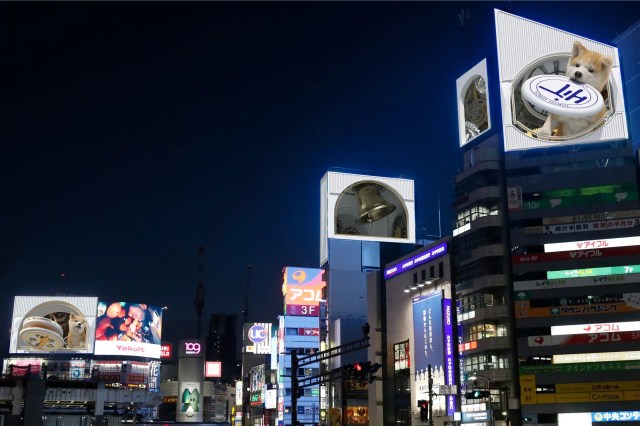 Akitas appear in an appropriate part of town.

The Shibuya neighborhood is one of the most densely developed downtown districts in Tokyo. Just about anywhere you look, you’ll see towering skyscrapers covered in screens and signage, and so it takes something really special to stand out and grab people’s attention.

And of course “really cute” qualifies as really special, which is why Tokyoites are oohing and ahhing about seeing giant puppies playing in the city skyline.

The pups started appearing at the end of July on the Syncro 7 Shibuya Hit Vision and Shibuya Hachi Hit Vision digital billboard arrays found across the street from Shibuya Station. The adorable little pooches are Akitas, the same breed as Hachiko, the beloved real-world dog that became a symbol of devotion by waiting In front of Shibuya Station day after day waiting for its owner to come home, unaware that he had passed away while at work.

In total, the Akita Dog 3-D Clockwork Clock makes use of eight gigantic monitors, and rather than repeat the same image on each screen, the whole set is used for cute animated sequences in which a frisby is launched from one screen and goes flying across the others so that a second dog can catch it, and another in which a dog itself leaps from one screen to another.

The “Clock” part of the project’s name refers to how the sequence plays every hour on the hour from 7 a.m. to midnight, with the exception of 7 p.m. (maybe the Akitas are eating dinner then?). With Japan’s summer vacation season just around the corner, the dogs are sure to be bringing smiles to the faces of visitors to Shibuya, and hopefully they’ll get along OK with the giant 3-D cat that sometimes shows up a few train stops away in the Shinjuku neighborhood.

For older dogs, risk of dementia rises with hearing loss

Prey Lets the Dog Live — And Help Save the Day

What does owning one of these dogs say about you?