Kitten Found Running Around in a Garage, Decides to Tuck Himself into Woman’s Neck and Start to Trust


A kitten was found running around in a garage. He decided to tuck himself into a woman’s neck and start to trust.

It was a beautiful day in the fall of last year when Marijana had a surprise encounter with a pint-sized kitten. She was at her parents’ house, lazing outside on the porch, when she suddenly heard what sounded like a cat.

“I figured out it was coming from the garage, so I went to the entrance, and I saw this little white ball of fur run and hide,” Marijana shared with Love Meow. “I kept trying to grab him, and he just kept hiding behind different things in the garage.”

The kitten was in a state of panic and refused to let up, but whenever Marijana meowed to him, he was drawn towards the sound. “I found a YouTube video of cats meowing, and I just played that on a loop and hid on the outside of the door.” 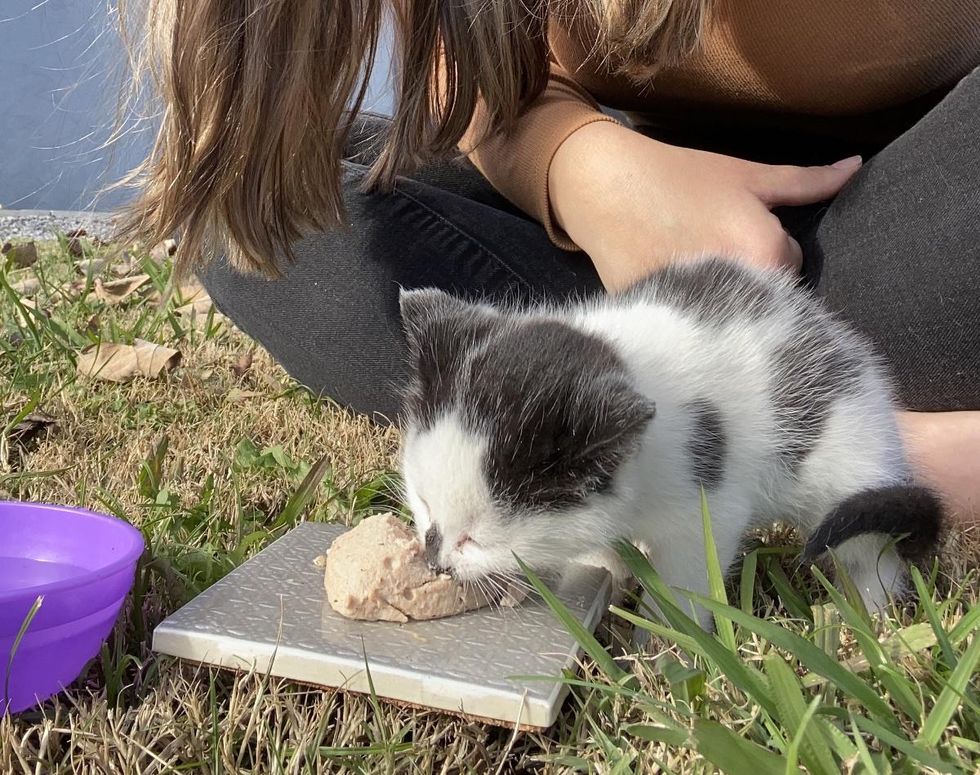 Slowly but surely, the kitten emerged from his hideout and crept up to the entrance. When the little guy was scooped up, he thrashed around, gifting his rescuer a few scratches, before realizing he was safe.

After wolfing down some nourishment from the kitchen, the kitten’s demeanor quickly turned around. “I gained his trust through some pâté and he crawled all over me. I had never met a more loving cat.” 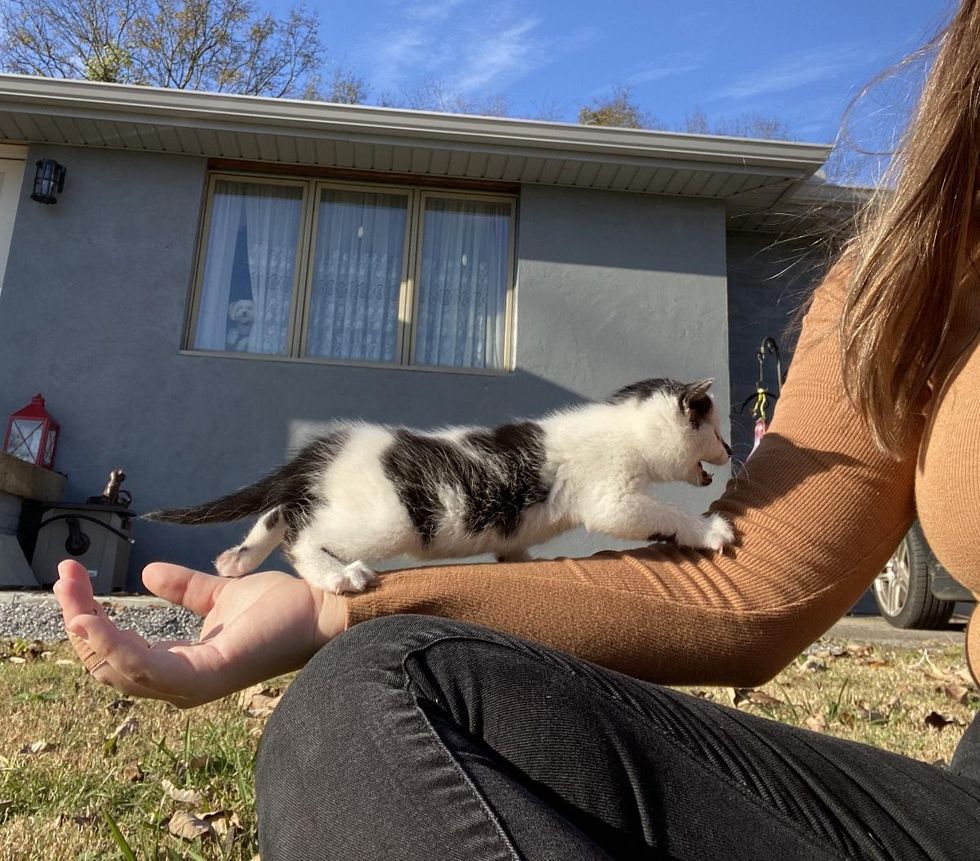 The kitten was in need of a foster home, so with the help of her friend, Alison, they got in touch with Erica Ciccarone, a journalist, who volunteered for Nashville Cat Rescue at the time.

As soon as the kitten was placed in a carrier, Erica was met with boisterous screams from the tiny fluff-ball. She lovingly named him Moon Pie. “Weighing just under a pound and covered in fleas, his round face reminded me of the moon,” Erica told Love Meow. 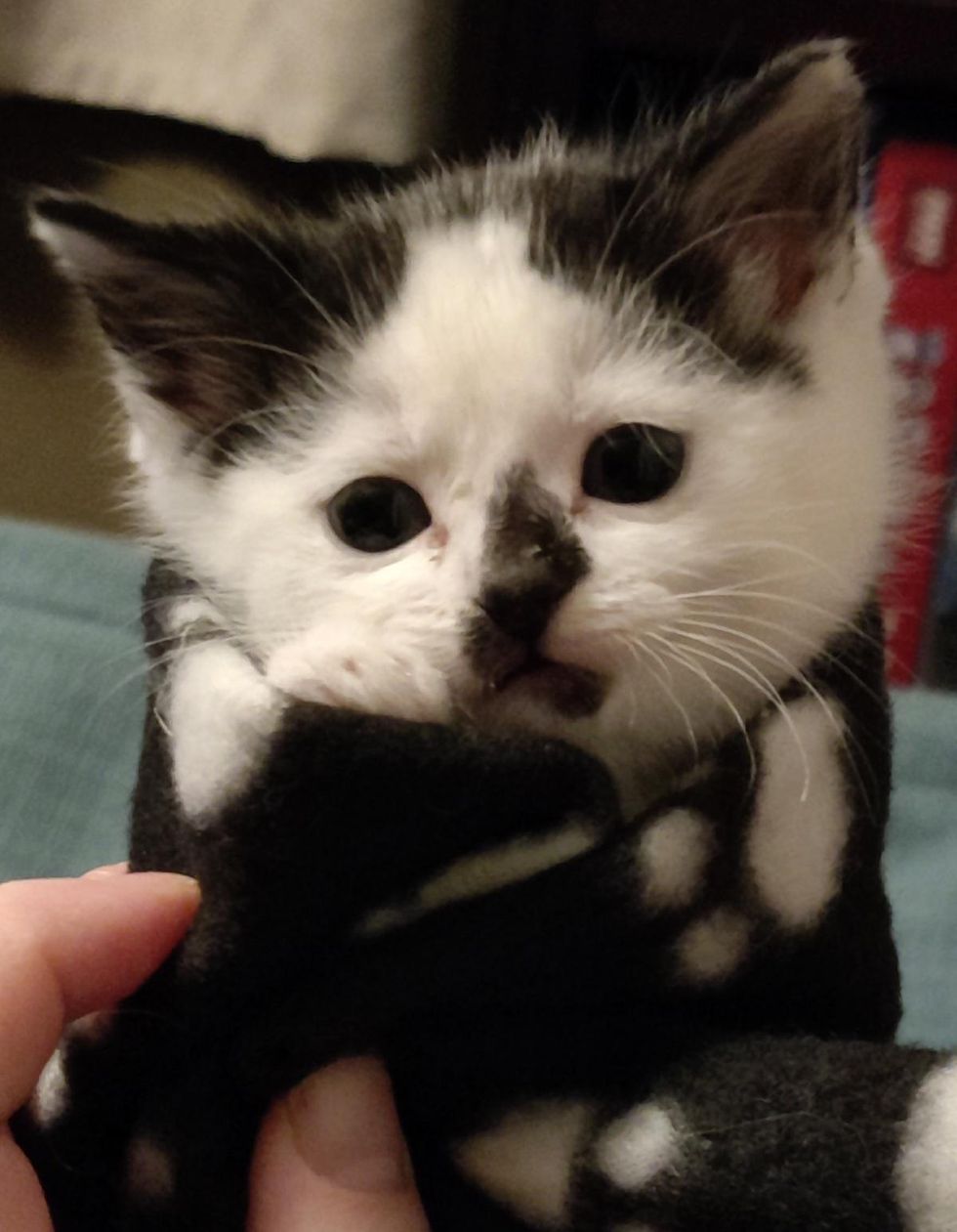 “My priority was helping him to put on weight. I always quarantine new fosters for two weeks before they can mix with other animals in the house. Moon Pie had an upper respiratory infection, so his period of solitude in my bedroom was longer than I anticipated.”

As Moon Pie acclimated to the indoor life, his personality came out in full swing. He demanded constant attention from his people and wouldn’t take no for an answer. Personal space was never a part of his vocabulary, and his love language was nuzzling up against his human’s neck. 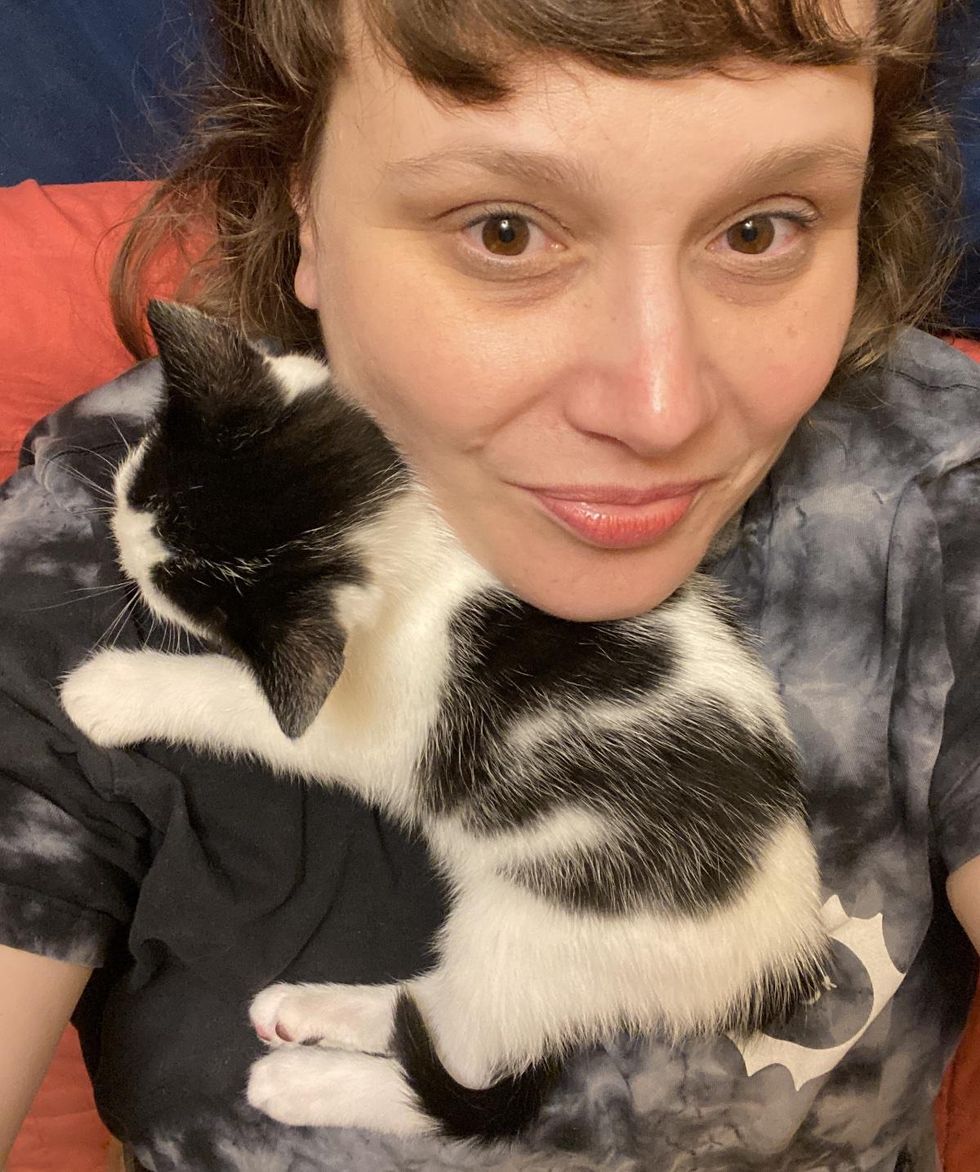 Moon Pie cuddled up on Erica, in his favorite napping spotErica Ciccarone

“He quickly revealed himself to be a tiny maniac. If I put him in the enclosed playpen, he shrieked. If I left the room, he also shrieked. He scampered around day and night and attacked my face while I slept. All of this was forgiven each time he crawled up my chest and tucked himself into my shoulder.”

Watch Moon Pie the kitten in this cute video:

The little rascal desperately wanted a friend to keep him company. Once he was medically clear, Erica introduced him to her resident cat Jasper, whose friendship with Moon Pie tempered his unbridled energy. 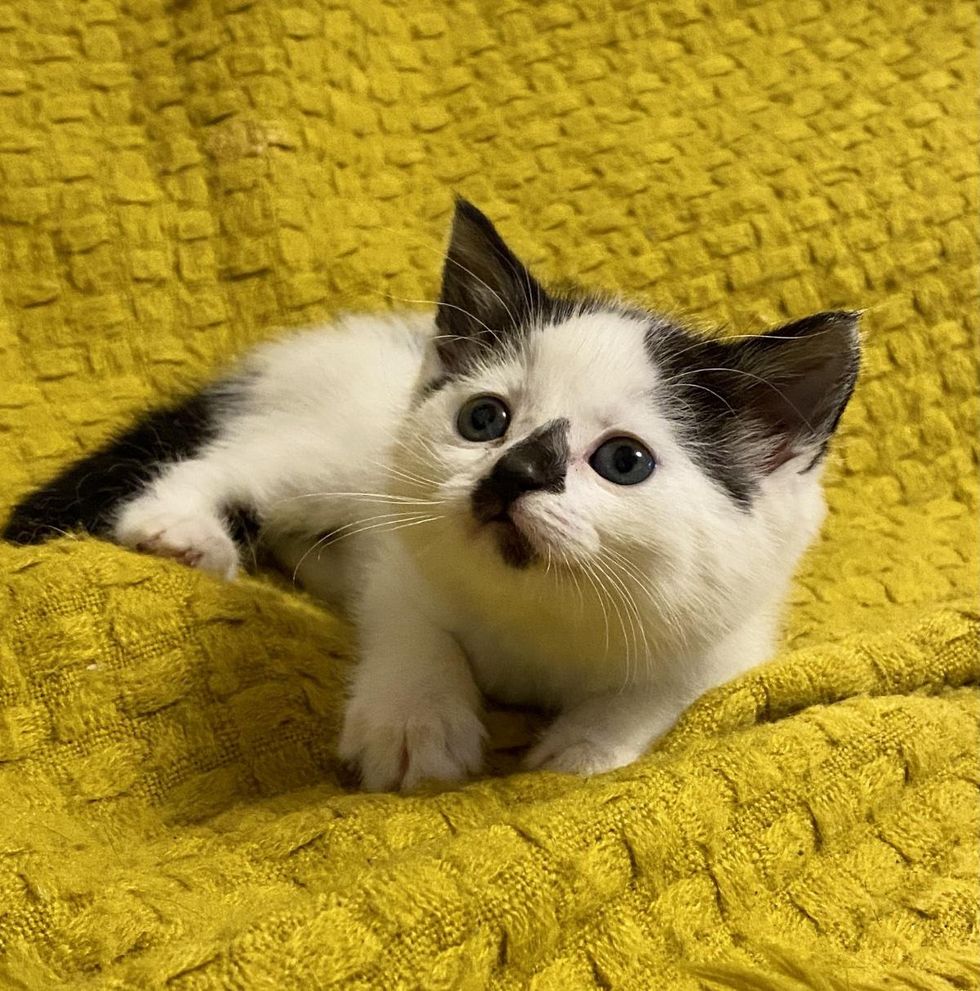 “Moon Pie loves to tackle and was not deterred by Jasper’s attempts to shake him off. The pair groomed one another and snuggled and tore around the foster room.”

Jasper imparted feline manners to his little protégé, and showed him the ropes around the house. He put up with Moon Pie’s rambunctious outbursts and showered him with licks and cuddles. 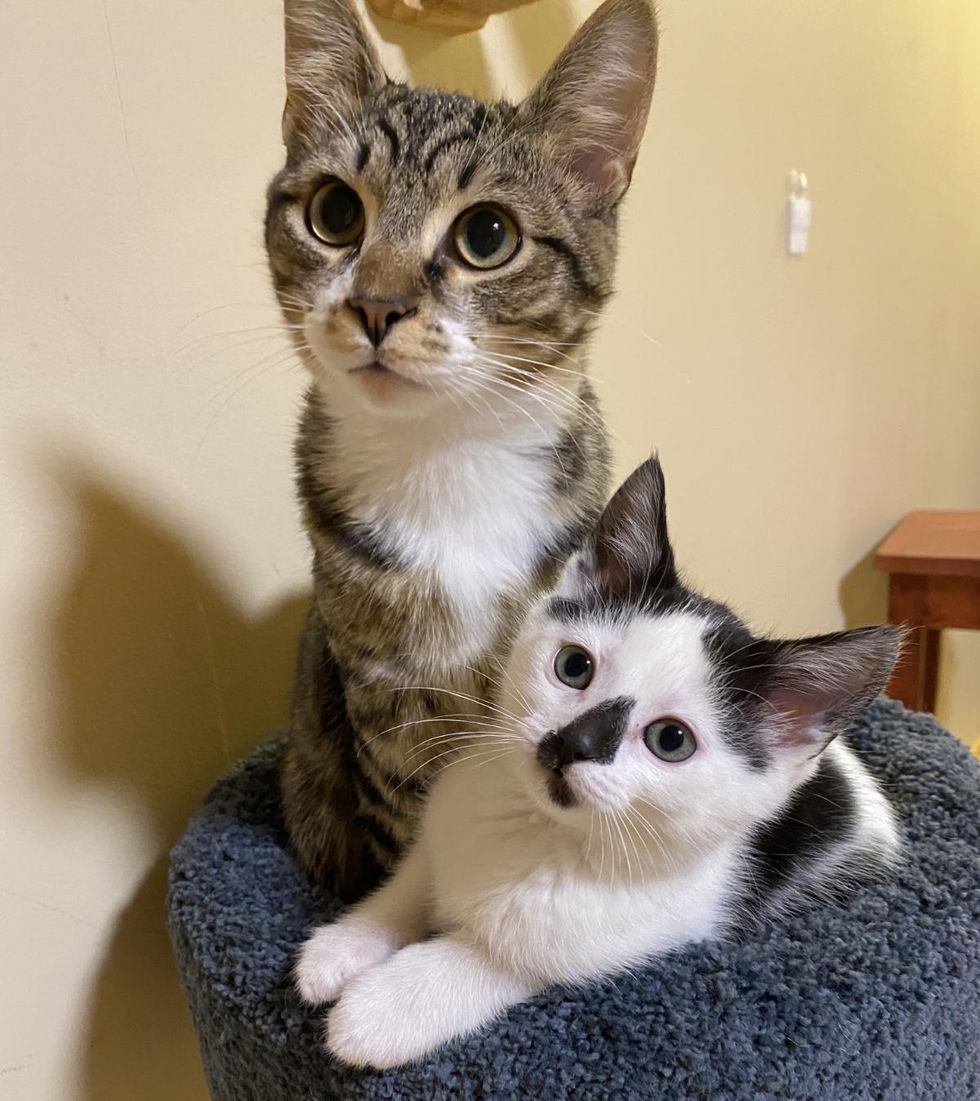 “When he’d finally tire Jasper out, he’d have a blast dancing and tumbling around the room with a crinkle ball, or pouncing on the floppy fish toy that he loved and feared.”

After a full day of playing, the kitten would wrap his arms around a friend or curl around Erica’s neck and fall asleep. When the day arrived to find a forever home for the little mischief-maker, a wonderful family was eager to meet him. 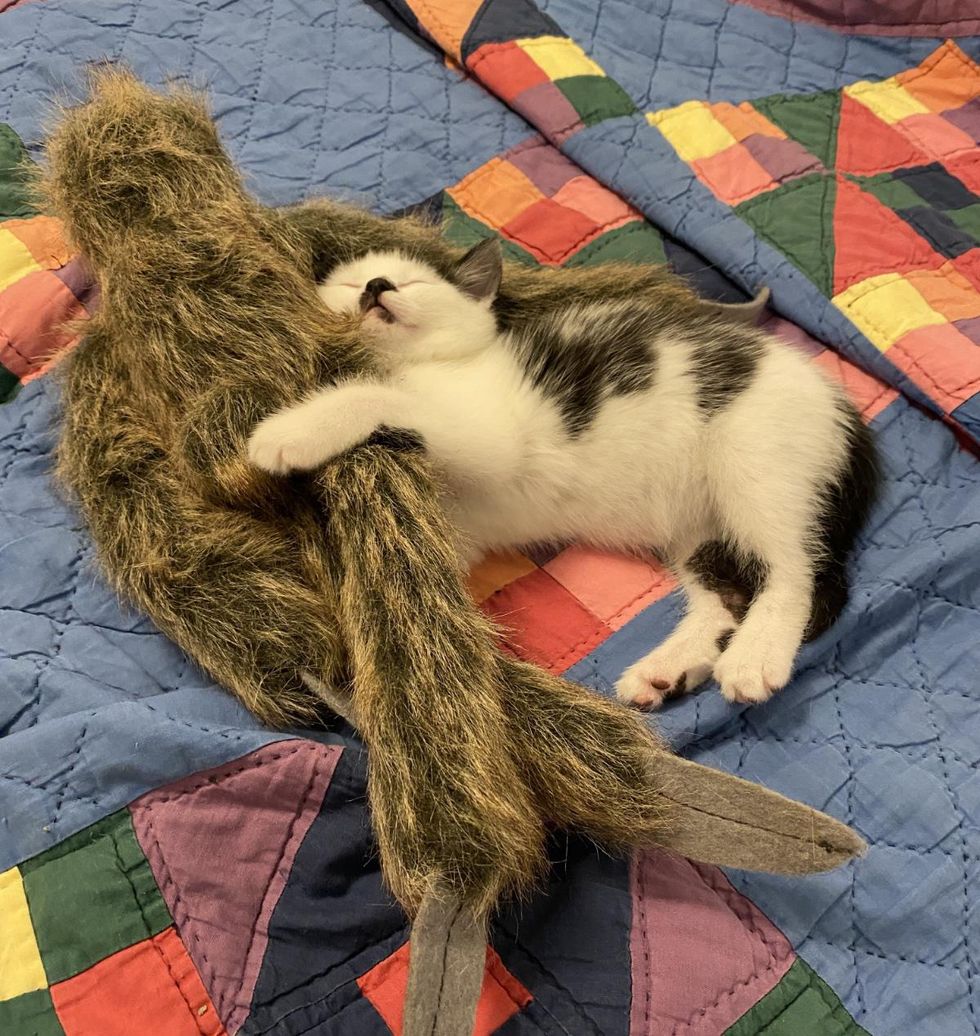 Heather who had followed Moon Pie’s foster journey since the beginning, fell head over heels for him.

“When Heather and John came to pick Moon Pie up, he crawled into their carrier and lay down. He was ready for his new life in the hills of Tennessee.” 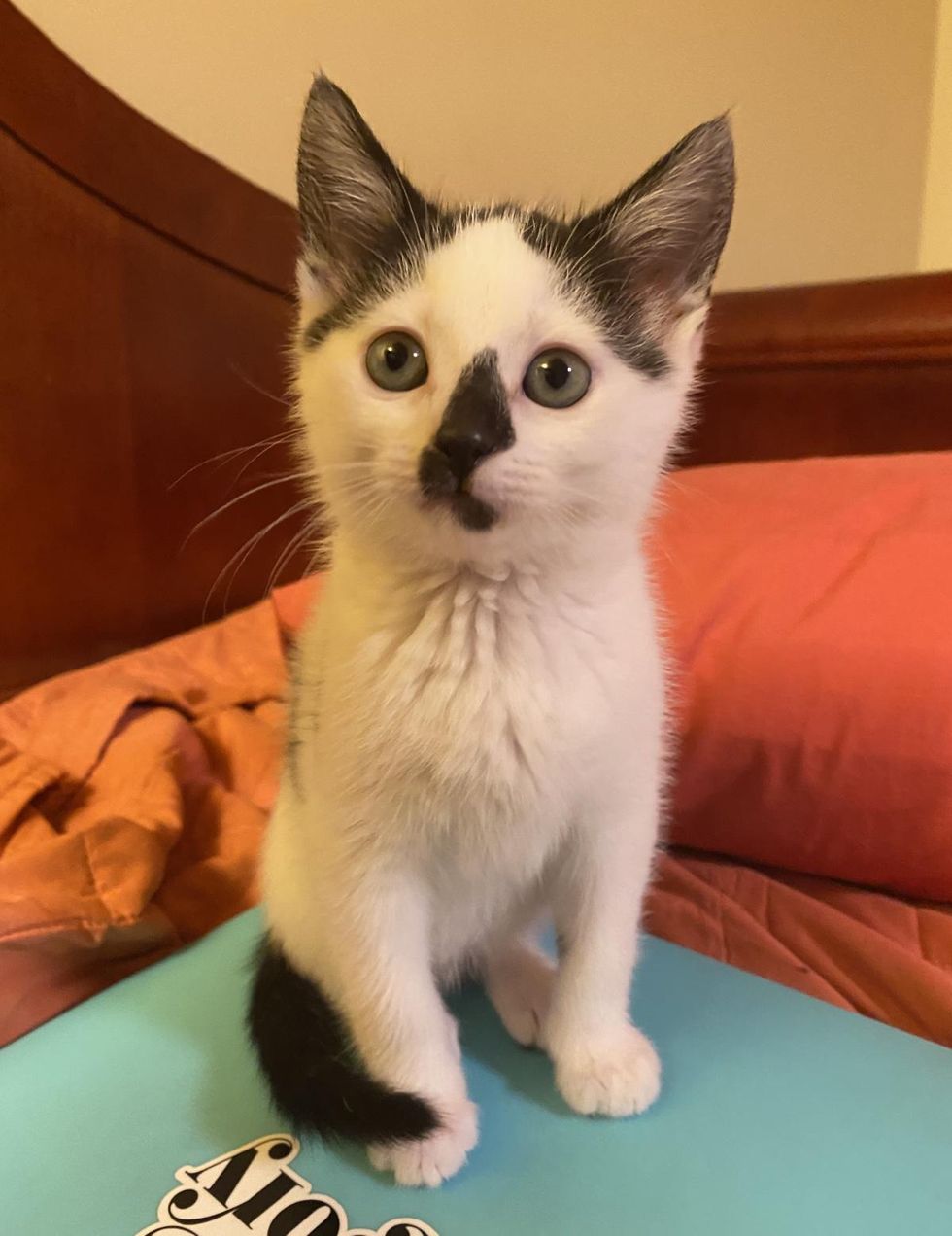 The palm-sized kitten has blossomed into a handsome young cat. “Moon Pie loves swimming in the sunlight on our front porch, pouncing on his big (feline) brother Charlie, hiding under rugs and blankets, and playing fetch,” Heather shared.

“His white fur shines as bright as the moon, and he makes us laugh every day. We are so glad His Pie-ness is part of our family.” 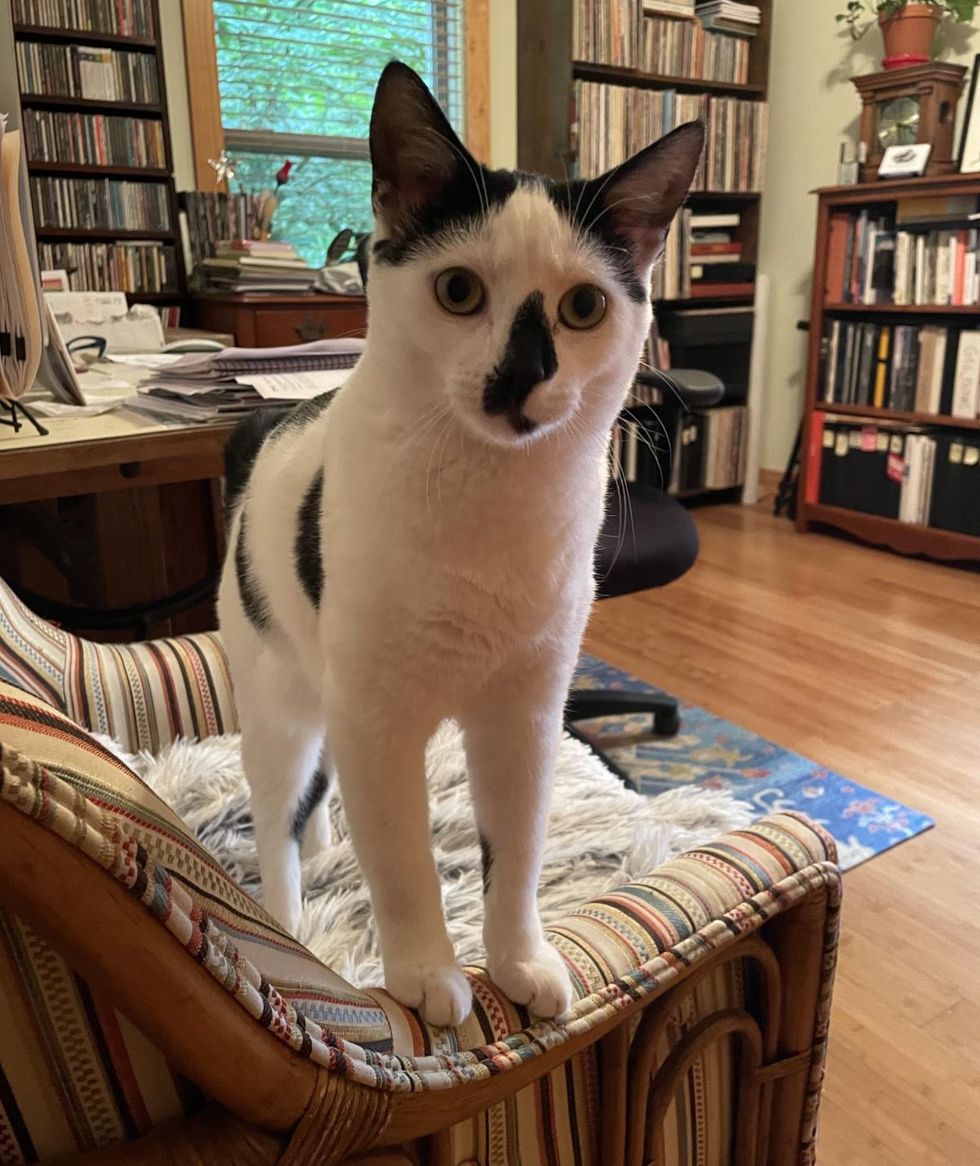 Moon Pie is all grown up nowHeather

“I am determined to trap Moon Pie’s feral mom and get her spayed so that she won’t have to have babies anymore,” Erica added. “Rescuing one little kitten takes a lot of collaboration, and Moon Pie brought us all together.”

Related story: Kitten Runs Up to Man and Jumps in His Arms When He Finds Her Under a Car

Ask Jenny Ross: Should my husband put his £60,000 redundancy payout into a pension?

How To Make Your Cat More Comfortable In Your Home » TwistedSifter

If You’re Owned by a Cat, Scientists Want to Hear From You

Family Dog Reminds us All about Fire Safety New York

The 11 Best Dog Foods For Huskies

What is a golden retriever boyfriend? And do I have one?