On the road into Es Migjorn Gran one morning I got to discussing tomatoes. I’d poked my head into the Ca na Pilar restaurant, in an old farmstead on the outskirts of a small town of sugarcube houses, and discovered a dining room of low-key loveliness. There were bright paintings on crisp white walls, and beams, and 200-year-old terracotta tiles. Sitting at one of the seven tables was the owner-chef Víctor Lidón, rethinking his evening menu.

A crate of tomatoes had just arrived from a nearby farm. They were too good not to use immediately. “Such quality,” Lidón said, handing one to me. Ruby red, smelling of long, hot summers.

Farm-fresh produce was the reason Lidón had returned to Menorca after years as head chef at Barcelona’s three-Michelin-starred Raco de Can Fabes restaurant. Yet how to showcase such perfection? A carpaccio perhaps? Maybe a starter such as pan con tomate? It was quite a problem. 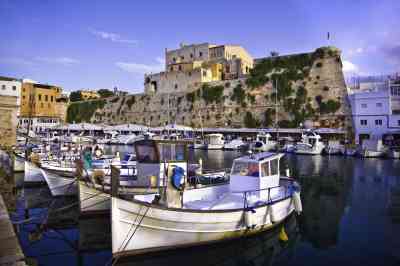 Did he always agonise over his menus like this? Lidón shrugged. “The produce of this island, it is incredible. A chef must have respect, no?”

Don’t be too hard on yourself if you have never ranked Menorca among Europe’s gourmet hotspots. While the Balearics’ second largest but least developed island has long had cachet among the sort of moneyed Spanish families for whom nightlife means nothing louder than the pop of a wine cork, most of us equate it with modest package holidays. If Mallorca and Ibiza are perceived as having sass and sizzle, Menorca is seen as a bit, well, dull.

It was a friend in Barcelona who put me right. I’d asked for restaurant recommendations in the Balearics. If I sought fine dining then Mallorca was best, with nine Michelin-starred restaurants, most in Palma. But, he added, if what I was after was an emerging, dynamic little food scene at prices that were a steal, Menorca was the better bet. Barcelonan chefs were moving in droves. I might actually have scoffed.

“Hombre,” he said, “listen.” He explained how an alchemical mix of small family farms, iron-rich fertile soils and the cleanest sea in the western Med provided Menorca with a cornucopia of stellar ingredients — the lobster was so exceptional, King Juan Carlos of Spain used to sail his yacht over to buy it.

Simultaneously, while Menorca’s designation as a Unesco biosphere reserve in 1993 had preserved its pastoral beauty, new small hotels had introduced style without sacrificing the soul that made it so appealing in the first place. Indeed, what once made Menorca seem hopelessly retrograde — its discreet rustic luxury, its persistence with authentic local gastronomy while other Balearic islands fussed over emulsions and foams — now appeared forward-thinking. Blingy restaurants and brash style were so año pasado.

Ciutadella offered the first indication I’d struck gold. I followed locals with baskets through a cat’s cradle of nicely dilapidated lanes (bottle-green shutters, wrought-iron balconies, plaster the colour of old ivory) to emerge into Plaza de la Libertad. Farmers in suit jackets that had seen better days touted fat round cheeses (a legacy of British rule in the 18th century) and homemade sausages as chewy as their names: salami-like carn-i-xua, Catalan botifarro and sobrasada, a spicy raw pork sausage that came soft or mature. 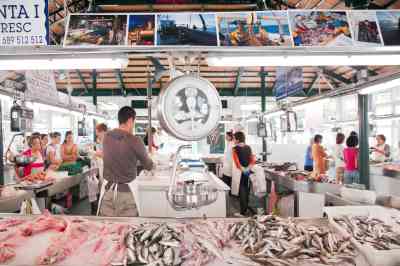 The fish market in Ciutadella

Better still was its fish market. Within a green-and-white tiled hall were prawns and squid, live crabs and lobsters, red snappers and monkfish, and sardines and dorade. I bought a silver-blue dorade, had it gutted, then grilled at an adjacent café. Food miles? Here it was metres. Total cost: a fiver for the fish, three quid for cooking.

In the course of a week I became quietly food-obsessed. Each day I would check the weather to plan a beach — you go north if the wind is from the south and vice versa — but soon I would be waylaid. There was too much good stuff to discover.

Hoping to buy picnic supplies in the capital, Mahon, I lost hours browsing street-food stalls of Menorcan producers at Mercat Femenias instead: some calamari in a squid-ink bap here, some translucent jamon pearly with fat there. Did I fancy a glass of chilled rosé from Binifadet vineyard? I certainly did. A jazz trio played.

Another time, on a whim, I followed a sign to Formatges Santa Catalina. A dirt track ended at a white shuttered farm from children’s stories, with pigs dozing in a sty and doves cooing on the roof. Antonia emerged twinkling. She bustled me into a cellar ripe with cheeses — all handmade using nothing but her herd’s milk, she said. The semi-mature was soft and buttery. The mature cheese had the nutty, salty hit of premium parmesan. A certificate hung on one wall — in 2015 Spain’s Salon de Gourmets had ranked the mature among the best three cheeses in Spain. Not bad for a little farmhouse on a boring island.

I haven’t even told you about the restaurants. There was fried cuttlefish and sobrasada I ate at the fish restaurant Cap Roig, dining among Spanish families as garrulous as starlings above Cala Mesquida (mains from £12, restaurant caproig.com). There was the hour that became two on a bar stool at Mahon’s Ses Forquilles, lingering over precise, immaculately executed small plates that included tempura anchovies with a lime mayonnaise dip and a sobrasada lollipop (mains from £7.50, sesforquilles.com).

There was also Mon in Ciutadella, the office of Felip Lluifriu (monrestaurant fonda.com). Why had a top-end chef returned to his native island after working in the Roca brothers’ globally fêted El Celler de Can Roca and Roca Moo restaurants?

Mon means home in Catalan, he told me. “I value more the taste and quality of products from my island than the presentation of a plate full of fireworks.”

He didn’t do incendiary prices either. My three-course menu cost £25.

Grounding it all was Menorca. With few holidaymakers, the island had an air of self-contained serenity. There were hardly any sunbathers on beaches of improbable beauty: Cala Presili and Cala Pregonda in the north; Cala Mitjana and Cala Macarelleta in the south.

It was en route to Macarelleta that I visited Can na Pilar (mains from £19, canapilar.com). After my week, I barely blinked when a chef obsessed over a tomato. It appeared when I returned that evening, served as a bonus with a faint hoarfrost of salt, a basil leaf and a slug of local olive oil.

It struck me as a perfect expression of the culinary zeitgeist, almost a haiku of modern cuisine, so simple, so pure. So Menorca, in fact. 1. Menorca Experimental, Calas Covas
First it was cocktail bars, then it was hotels — now the Experimental group has opened its first agroturismo. Menorca Experimental mimics an artist’s cottage, with splashes of pastel pink here and a wall of straw cowboy hats there. On a rocky south coast stretch, this 19th-century farm estate has a spa, oceanside yoga platform, Mediterranean restaurant and infinity pool, where the bar serves the brand’s classic cocktails. Pottery classes can be arranged, and sandy beaches are within 15 minutes’ drive.
Details Seven nights’ B&B from £1,525pp, including flights and private transfers (carrier.co.uk)

2. Lago Resort — Casas del Lago, Cala en Bosc
This adults-only bolt hole on a palm tree-lined marina has a chichi beach club too. You can watch yachts glide by from your poolside Balinese daybeds as the cocktails flow. There’s a sandy cove beside you, plus numerous restaurants, bars, a huge spa and even a nail salon. Ocean-blue furnishings and paintings of the sea enliven whitewashed apartments, each of which features a balcony or terrace. Ciutadella, Menorca’s magical medieval port, is a 15-minute drive up the west coast.
Details Seven nights’ full board from £614pp, including flights (travelrepublic.co.uk) 3. Torre Vella Fontenille, Alaior
France’s glamorous Fontenille group owns a southern Menorcan seaside estate, with two hotels several miles apart. One is an austere farmhouse with walled Arabian gardens; the other, Torre Vella, is a cooler 14th-century watchtower. Here you’ll find greenery and driftwood furniture around an outdoor pool. The same earthy ethos means massages and yoga classes are offered beneath olive trees or on clifftops. A large spa and classy Catalan-Menorcan restaurant are also yours to enjoy.
Details Seven nights’ B&B from £1,648pp, including flights and transfers (abercrombiekent.co.uk) 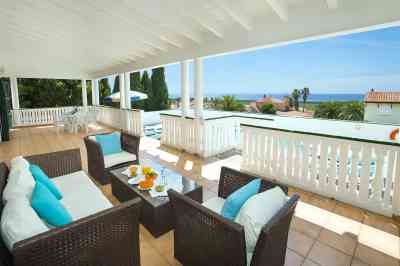 4. Villa Sonya, San Jaime Mediterraneo
Keen on some September sun? Menorca will still be averaging 23C, and the three-bedroom Villa Sonya has a trio of ways to take advantage of that. There’s a sizeable sea-view pool, flanked by a deep veranda for alfresco dinners. There’s the scenic countryside footpath that emerges, after about half an hour of walking, on the unspoilt bay of Atalis. Or there’s golden-sand Son Bou, the island’s longest stretch of uninterrupted beach and just five minutes away by car. You’re also close to the harbour capital of Mahon.
Details Seven nights’ self-catering for six from £898 (vintagetravel.co.uk). Fly to Mahon 5. Palladium Hotel Menorca, Arenal d’en Castell
Above Arenal d’en Castell’s wide, powdery crescent on the island’s north coast, this new arrival overlooks pine forest and a generous sweep of the Med. With 264 rooms, it’s big, but relatively upscale as resorts go: there’s a spa and a buffet restaurant where a slow food ethos champions local and Balearic specialities. You have a choice of swimming pools and bars, plus nightly entertainment.
Details Seven nights’ all-inclusive from £687pp, including flights and transfers (tui.co.uk) 6. Hotel Torralbenc, Cala’n Porter
In 2005 Torralbenc’s 19th-century farmstead lay in ruins. Remarkably it now ranks among the island’s finest hotels. Restored lilywhite walls frame 27 bright bedrooms with private terraces, plus a Natura Bissé spa. Outside, past a Menorcan-Basque fusion restaurant and the long pool — where waiters will ferry your drinks — is an acclaimed winery. Then comes the coast: you can beach-hop aboard Torralbenc’s traditional “llaut” sailboat, or lounge in Cala’n Porter’s cute cove.
Details Seven nights’ B&B from £1,799pp, including flights and private transfers (classic-collection.co.uk)
Richard Mellor

Man succeeds in dogged quest to become a Lassie lookalike

Kiki the cat, missing for 5 years, flies from Edmonton to Ontario for reunion with owners | Globalnews.ca – Global News