My cats are kleptomaniacs that have even stolen a HAMSTER


Furious locals are demanding a red-faced church minister keep her kleptomaniac cats inside – after burgling sprees saw them swipe a little girl’s ballet shoes, a dress and even a pet hamster.

Julie King, from Redmond, Oregon, first realized her cats Catty and Cali were shameless thieves two years ago when she collect their haul in a sack before dumping it on her neighbor’s doorstep to return it.

But when two pink dance slippers turned up on her lawn on separate days and she learned the woman next-door didn’t have a little girl, the 48-year-old realized the furry criminals had committed their home invasions further afield.

The grandmother claims the Siamese cats have been known to sneak in through open windows to scope out items to snatch and have even swiped a live hamster – which she was never able to reunite with its owner so kept it. 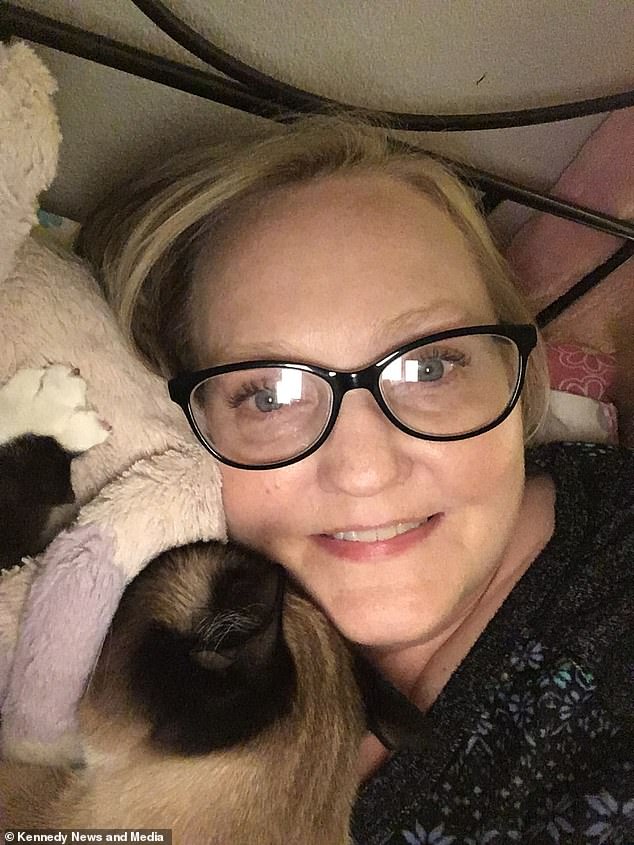 Julie King, 48, from Redmont, Oregon, has to make do with her cats Catty and Cali, who love nothing more than stealing from her neighbors

After rounding up the felines’ latest contraband, church minister Julie posted on a local Facebook group offering the safe return of their stuff.

But some furious locals failed to see the funny side, branding their anti-social behavior ‘absolute bulls***’ and demanding she keep them inside.

Julie said: ‘In the last two years, they would bring things and I would collect it for about a month then go next door where I thought it was coming from and leave it in a sack on her doorstep.

‘But she messaged me last summer sometime to say obviously the cats were travelling further because a lot of the stuff I was getting wasn’t hers. We laughed and laughed. 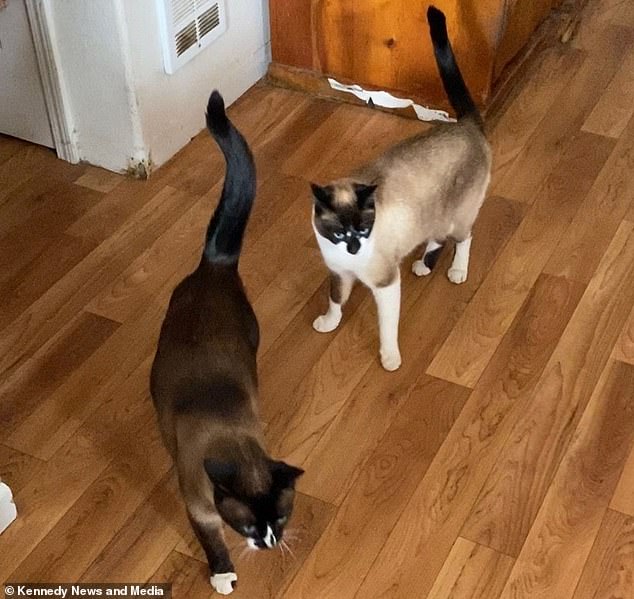 Cali and Catty have been bringing Julie and her husband gifts taken from her neighbors home, and the couple have to keep returning the items every time 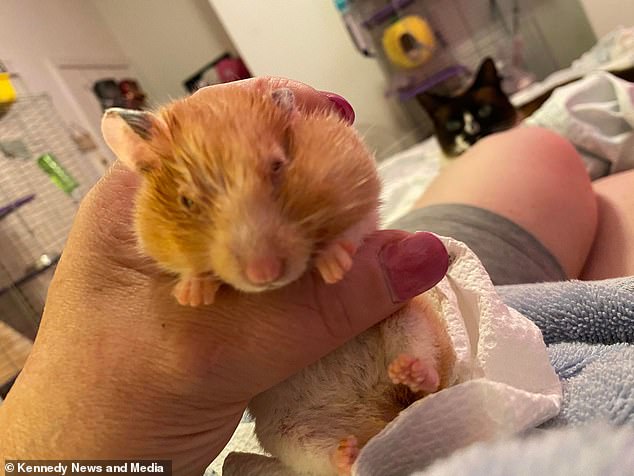 Julie was shocked when the pair of kleptomaniac cats came home with a pet hamster. She has never been able to find the owner 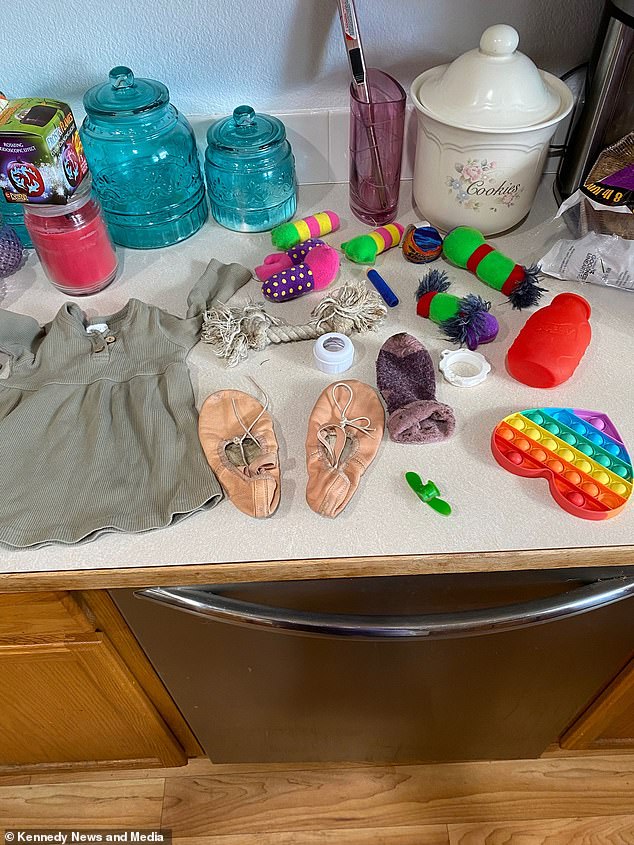 A picture of the cats’ loot, which includes ballet shoes, a little girl’s dress, a sock and several pet toys

‘The stuff started to get bigger, like the ballet slippers, a baby’s dress. They’re going right into people’s houses.

‘The hamster thing was crazy. I got woken up in the middle of the night when I heard a scuffle.

‘I got out of the bed and saw a flash of light. I called for my husband and thought it was just a field mouse, but he bent over, picked it right up and she was so tame, so sweet.

‘She almost died but I nursed her back to health and she lived probably six or seven months. We never found the owner.’

Julie and her husband Allen holding their thieving felines to the camera. Some neighbors have dubbed the cats ‘antisocial’ 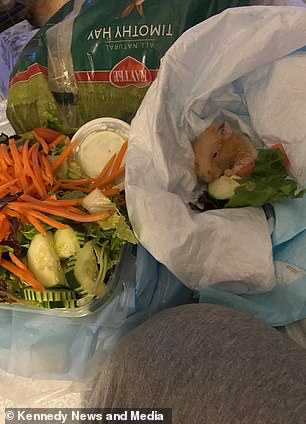 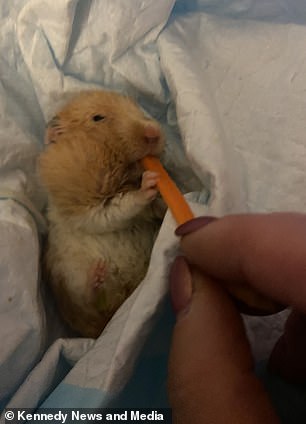 The little hamster munching on a carrot. Julie said the pet lived for six months after being found by the cats 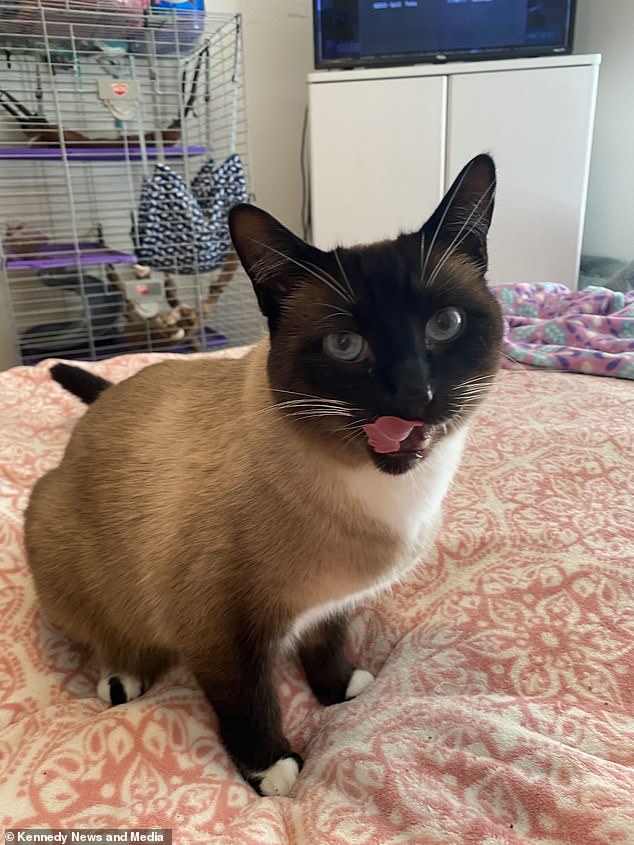 Siamese cat Catty has shown no remorse for her thieving enterprise, to the despair of Julie’s neighbors 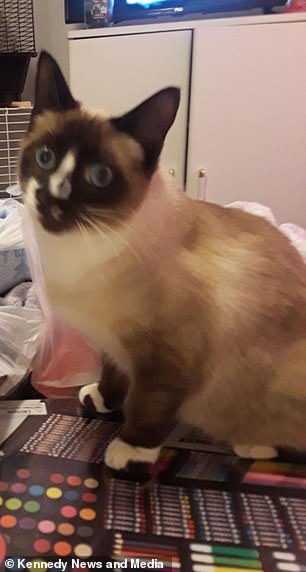 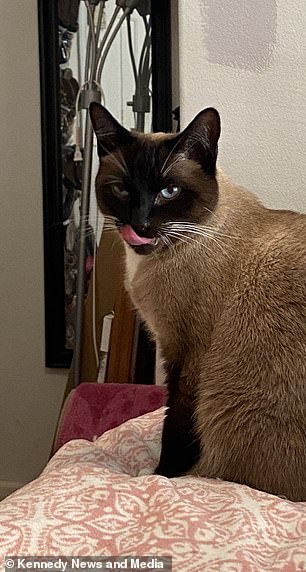 Catty, left, and Cali, right, have been bringing items home that don’t belong to them from across their owners’ quiet Oregon neighborhood

But despite their anti-social tendencies, she claims they will always be ‘indoor and outdoor’ cats – advising locals keep their doors and windows closed instead.

Julie said: ‘When I finally got the ballet slippers was when I started trying to post [online] because I thought someone’s little girl might need these. The little shoes came on different days too.

‘This was the haul from September, October and November.

‘I had gone to the neighbors’ houses asking and nobody had a little girl. That’s when I decided I’d better search a little further and put it on the lost and found for our local area. 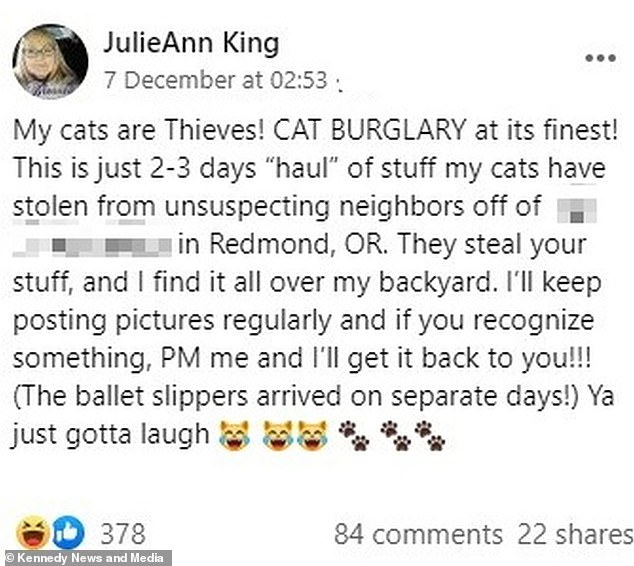 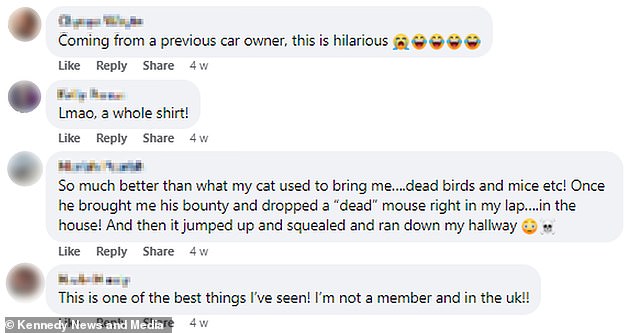 While some neighbors saw the funny side, others have not found the cats’ thieving funny and have asked Julie to keep the pets inside

‘Most people are very good natured about it. My cats are definitely all indoor and outdoor. I have asked people that if they catch my cats in the house to please not hurt them.

‘These people must leave their windows or doors open for the cats to get in.. I don’t believe all this stuff was outside.

After posting her confession on Facebook, Julie was inundated with comments from delighted locals keen to hear of Catty and Cali’s latest finds – but others weren’t too impressed.

One local said: ‘Don’t let your cat run wild. They can be indoor cats – although you will have to clean litter boxes a couple of times a day. Be a responsible pet owner.’

Another said: ‘What absolute bulls**t. Keep your cat inside.’

While a fellow pet owner said: ‘This is one of the best posts I’ve ever seen.’

An animal lover said: ‘Coming from a previous cat owner, this is hilarious.’