Police send NINE officers, some with Tasers and battering ram, to seize Bobby the Yorkshire terrier


A mother-of-two has described how she feared for her life and claims her family home was swarmed by armed police officers to take away her beloved Yorkshire terrier.

Hayley Scanlan, a 28-year-old from Huntington, Cambridgeshire, was shocked to find nine police officers at her door, demanding her dog Bobby is handed over to them after the former owner wanted him back.

Bobby was still microchipped to the old owner in Luton, who reported him as stolen, providing officers with a warrant to seize the tiny terrier.

Hayley, who works for a law firm, refused to open the door for almost an hour, in which time police had called for backup, including two armed officers, who sealed off the cul-de-sac.

The 12-inch-long pup was being cuddled by Hayley’s six-year-old son Hugo upstairs, who was ‘holding on to Bobby for dear life’ and crying his eyes out at the stressful situation.

Hugo has been prescribed medicines to help him sleep at night and referred for counselling since the ordeal. Hayley says she is now taking medication for anxiety. 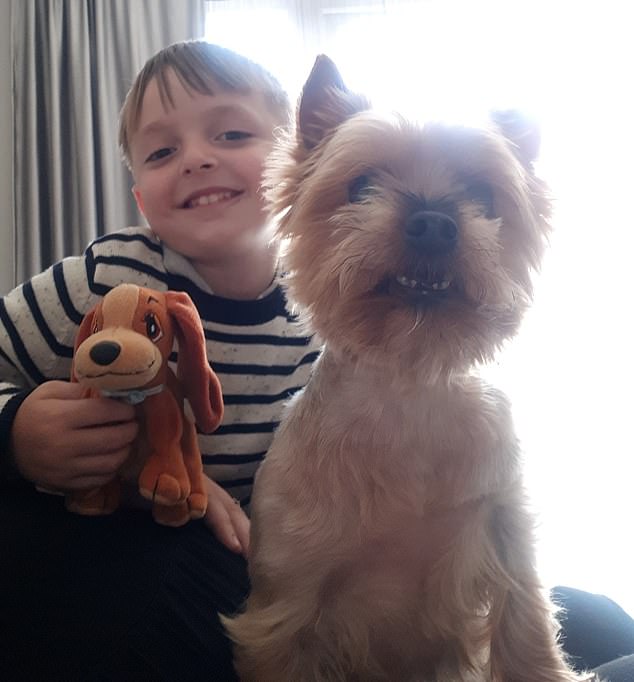 Hayley Scanlan, a 28-year-old from Huntington, Cambridgeshire, was shocked to find nine police officers at her door, demanding her dog Bobby is handed over to them after the former owner wanted him back. Pictured, her six-year-old son Hugo with little Bobby

‘My sons mental health that he has constant night terrors, he is unable to stop talking about the incident describing that he thought the police were going ‘to set a dangerous creature into the house to eat us’ and he thought it was a dragon trying to bang the door down,’ Hayley said.

‘Even during play he just rights about the police and keeps talking about their guns.’

Hayley refused to give Bobby up for almost an hour before an officer got a breach tool ready to break down the front door.

Speaking to The Sun, the 28-year-old said: ‘I’ve always declared I’m innocent, I’ve never stolen that dog, he was given to me – I couldn’t understand the warrant that was being read out before me but they said I had ten minutes before they’d remove him by force.

‘He goes on lovely walks, he is well-treated, he gets the vet treatment he needs, everything a responsible dog owner should do, I’ve done for that dog, just for him to be taken away and given to this lady who had neglected and abused him. 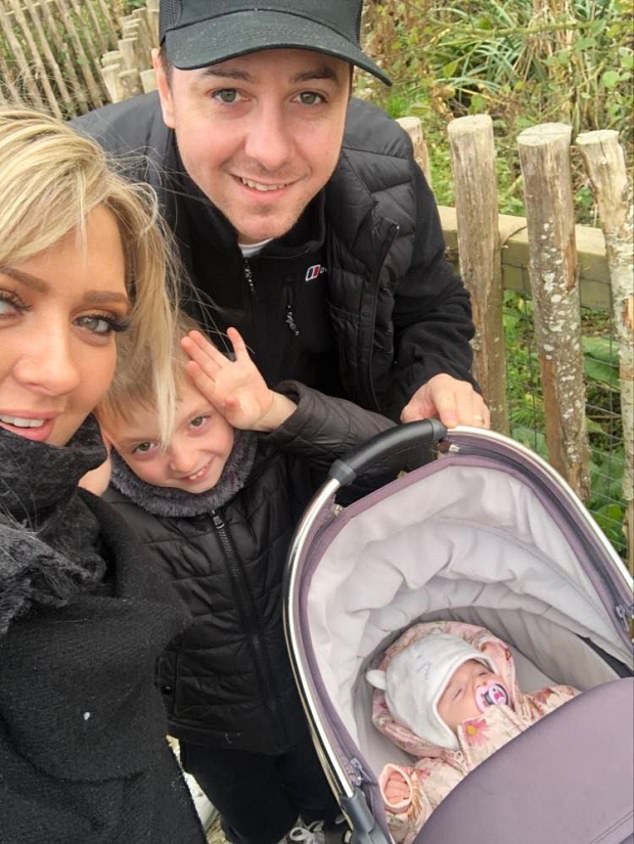 Hayley Scanlan, a 28-year-old from Huntington, Cambridgeshire, pictured with husband Iian, 32, Hugo, six, and daughter Dolcie, seven months, was shocked to find nine police officers at her door, demanding her dog Bobby is handed over to them after the former owner wanted him back 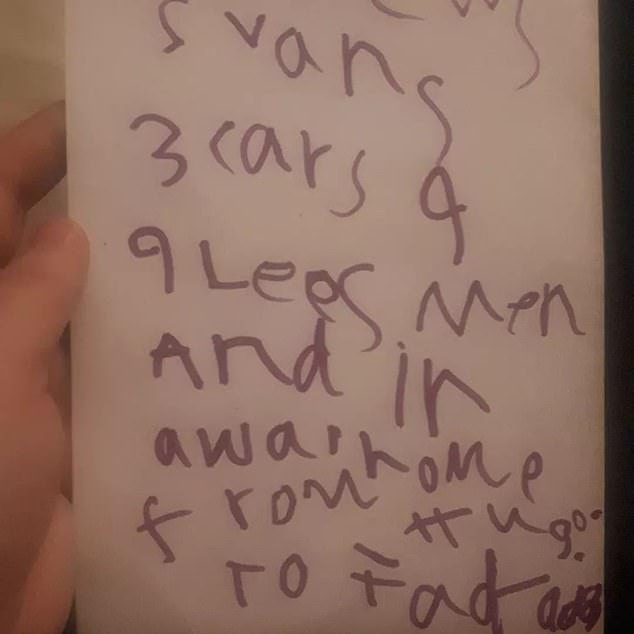 ‘My sons mental health that he has constant night terrors, he is unable to stop talking about the incident describing that he thought the police were going ‘to set a dangerous creature into the house to eat us’ and he thought it was a dragon trying to bang the door down,’ Hayley said

‘This is a dog that has feelings, he has been attached to me for 11 months, he follows me around like a little shadow.’

Hayley went on to explain how she ‘feared for her life’, adding that she had been treated ‘so badly’ by police who she insists ‘never wanted to listen’ to her side despite having witness statements proving her innocence, she claims.

Officers told the mother-of-two that the case was going straight to the Crown Prosecution Service and later to court, but the old owner did not want to, leaving Hayley in limbo.

Husband Iian, 32, an operations manager, took care of their daughter Dolcie, seven months, and comforted upset son Hugo, six, who was holding Bobby before the police took him away.

Hayley’s mother Kim Williams, 57, stood outside the front door with police and phoned her daughter to explain what was happening and described how the police treated them as  if they were ‘the Krays’.

Terrier Bobby is now with his former owner, in Luton, leading Hayley to start a petition on Change.org to try and get him back.

She insists that Bobby was willingly given to her when she and the family lived in Luton, last May.

Hayley shared these pictures of Bobby on her petition page when she first took him in as her own, writing: ‘As you can see from the photo of Bobby’s behind, the hair was matted and fused together’

The elderly neighbour who gave the pup away was recovering from a heart attack, with Hayley adding that she agreed Bobby was in better hands as the old owner could not take care of him properly.

But because of the microchip linking Bobby to the old owner, who reported the dog as stolen to police, a warrant was issued, leading to the potential forced entry incident which left the cul-de-sac closed off with swarms of police.

Her petition to get Bobby back, where she claims that the previous owner as ‘known to the RSPCA and Blue Cross for the cruelty and neglect inflicted on Bobby’, has just under 350 signatures.

She says she is filing a complaint against Bedfordshire Police to ‘prevent anyone else going through this’ and is facing the civil route of getting Bobby home.

Detective Inspector Melissa Cunningham said police executed a warrant in Huntingdon in connection to reports that a dog had been stolen in Luton.

`We understand there is a dispute over the dog’s ownership, and have tried to investigate this matter as fairly and as sensitively as we can to both parties over a number of months. However, despite speaking repeatedly to both sides we have ultimately been unable to come to a resolution.

`The dog is microchipped to an owner in Luton who has reported that the dog has been stolen, this is supported by witness statements.

`This is why we carried out the warrant last week, seized the dog in question and returned it to its legal owner.

`Two officers who were nearby were called to the scene to assist with a potential forced entry after police were refused entry to the property.

`However, they were not needed and the dog was eventually handed over to officers.

`We have provided a full update to the RSPCA on this incident and will continue to work with them as required to ensure the dog’s welfare.’

6 Australian creatives show us how they style big belts

6 Australian creatives show us how they style big belts

Weekly: Cat game, As Dusk Falls, and so much more