A group of some 45 dogs, which were recently confiscated after the authorities cracked down on a backyard breeder, will only be made available for adoption when they have been medically treated and neutered, Animal Welfare’s adoption officer Louise Arpa wrote on Facebook.

In an important announcement on Rescued is my favourite breed – Lulu Arpa, she wrote that Animal Welfare is currently going through hundreds upon hundreds of requests sent by the public requesting to adopt the dogs. However, they are finding very hard to find the offers to foster since they have been inundated with adoption requests. The recently confiscated dogs are not for adoption yet, Arpa stressed.

She explained that the foster families were able to help with groups and not single fostering.

“They are experienced fosterers and we cannot have so many dogs spread around so many places. Most importantly, they find comfort in each other,” she wrote.

Arpa urged the public not to send messages saying they have offered to take one or want to adopt, and added that Animal Welfare needs to place everyone and not just for the confiscation but many new rescues, just as deserving.

Furthermore, she explained that this point they would only be tackling the messages from fosterers able to foster a group of Cavalier King Charles Spaniels, one of our new puppies (that is not from the confiscation) and adoption requests for our dogs at Għammieri, just as deserving of love and a new start in life.

She urged the public to share the announcement saying that something like thousand people are calling and messaging Animal Welfare over the dogs which were recently confiscated and this was slowing them down. Arpa stressed that there is no room for nw rescues and there is a need to carry on with the fostering and adoptions of our dogs who are “ready”.

On Friday, the authorities confiscated some 45 dogs when police officers and animal welfare officials turned up to a Birzebbuga man’s home.

Last week a court fined Antonio Vella €20,000 and banned him from keeping dogs for 25 years after being found guilty of neglect. He was also handed a two year prison sentence suspended for four years.

Most of the dogs appeared to be Cavalier King Charles Spaniels as well as collie breeds.

Many of the puppies appeared caked in filth and excrement, with officials remarking that a few needed to be taken “straight to the hospital”.

Officials on site could be heard saying that puppies had been found hidden under furniture and inside wardrobes and that one dog that had been found had apparently recently given birth.

Around 45 dogs confiscated from backyard breeder 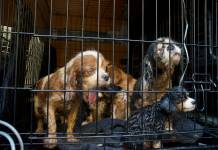 If you want to be the first to receive the latest news from Malta, download the Newsbook APP here.

BE THE FIRST TO RECEIVE THE LATEST NEWS

The 24 Best Dog Foods For Dachshunds

Robotic birds used to train birds of prey for the wild