Tito the Belgian Malinois spent nearly four days in the bitter cold in Saskatoon over Christmas before he was found alive, with the help of dozens of community members, family, police and animal control.

Owner Rina Wozniak says her family was visiting friends on Christmas Eve. At 7 p.m., she got a call indicating the front door of her house was wide open. Saskatoon Animal Control and police were called.

She believes Tito and her other recently adopted dog, Jace, got into some trouble together while the family was gone. Jace was found just across the street, but the other dog was nowhere to be found. 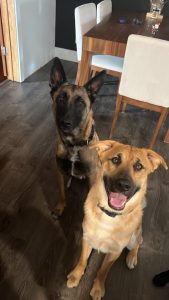 “The dog we just adopted, he was jumping on the door and the lock was on the handle. So when he moved the handle, the door popped open and unlocked,” Wozniak said.

After searching the neighbourhood all night and again on Christmas Day, the family was no closer to finding Tito. With an extreme cold warning across much of the province, and temperatures hovering around -25 C during the day and -30 C at night, Wozniak and her family were extremely worried.

She soon put out a call for help on local social media channels.

“The people who came together on social media, it was so humbling,” she said. “We had a group of close friends, they came over.

“I set up a lost and found post on Facebook Marketplace and Kijiji and I had a friend stay here the entire time and she had hot chocolate and chili. We had people come donating food.”

By Boxing Day, a search party was organized for anyone who wanted to help look for the dog. No one was able to find him.

“Our tires were spinning,” Wozniak said. “We knew he was out there, but it was so cold.”

On Monday, the family woke up tired, but still determined to go back out again. As they were heading out, Wozniak got a call from a family member telling her Tito was near the Brighton fitness facility in southeast Saskatoon. She then contacted friends, family and others on social media to come and help.

“It was the craziest thing,” she said.

She spotted her dog and ran into a nearby field to try and lure him to her.

“He wasn’t coming to anyone,” she added. “People lined up on the highways just to make sure we didn’t lose sight of him. The police came — they dispatched a few units. Animal Control came.”

After chasing the dog for an hour and a half, Wozniak couldn’t feel her legs anymore. Her father found her and drove her to where her dog was found standing in the middle of Highway 41. Police and Animal Control had the area blocked to traffic.

Tito, she later found out, had dug a hole in the snow near some brush and grass to try and keep out of the elements. He was cold and hungry and was checked out by a veterinarian for signs of frostbite.

Wozniak said the kindness, generosity and willingness for community members to come out during Christmas and help was incredible.

“There’s so much negativity,” she said through tears. “They restored our faith in humanity and now we feel we need to give it back any way we can.”

She said the locks have also now been changed on their doors.