The Laguna held an exclusive preview of the hotel’s restoration on June 30 in the lead-up to the G20 Summit in November.

“Laguna has a special place in Rajawali Property Group, The Sondakh family and in the hearts of our Balinese associates. It was a  project that was close to our hearts because we felt that it had so much history in the past, and we really needed to find the right language to capture all the sense of history that Laguna has without losing that charm, but at the same time restoring this historic icon to be relevant for the next generation,” said Shirley Tan.

Built 30 years ago by Rajawali Property Group, The Laguna was the first international resort in Nusa Dua.

Tan drew a parallel between the circumstances surrounding the resort’s inauguration in 1991 and its reopening this year, such as recession, fuel crisis and high inflation. The Laguna’s opening three decades ago represented more than a new hotel, but its catalytic role in the development of Bali’s tourism industry.

“Then the pandemic came, and it was devastating to the tourism of Bali. We needed a new vision, leaving a meaningful legacy in transforming lives, destinations and communities,” Tan said, adding that Laguna’s restoration could be a pivotal point for inspiring others to rebuild Bali for the future.

As for the hotel’s restoration concept, Shirley Tan admitted that it took a long time to come up with a design that balanced the nostalgia of the iconic hotel with contemporary references to make it relevant to the present as well as the future.

“The design concept is a voyage with Bali through time, so that was the whole idea. We kept the historical and architectural integrity with the original design of Laguna,” she explained.

“So basically, when we say a voyage with Bali through time, it looks at the transformation of Bali. What we have seen in the last 30 years is the emergence of the Ubud rain forest tents, the nautical explorations of what lies beyond Bali, and around Indonesia waters.”

One of the renovated buildings in Laguna (./.)

The rooms are filled with nautical elements and a palette of neutral, earthy tones that evoke calm seas. Emblematic features, such as a panel showcasing Balinese embroidered kebaya (traditional blouse), adorn the headboards of beds. A bespoke selection of lamps, shiplap walls and detailed leather suitcases come together as decorative elements in a nod to travel and discovery that forms the DNA of The Luxury Collection.

The revamped lobby, on the other hand, presents a pristine garden with centuries-old trees and lush greenery to illustrate the Ubud rain forest and the rice paddies of the “Island of the Gods”. As guests approach the lobby, they are greeted by the sound of a gong, traditionally used to welcome a member of the royal family, symbolizing the joy of welcoming a guest to an enriching experience during their stay.

“It’s truly an iconic brand. It is a legendary resort,” said Marriott’s Jackson. “Can you imagine that since 2008, the hotel has received 82 reputable awards? [It’s] Significant if you think about it. It has created memorable stays for almost 2 million guests.” 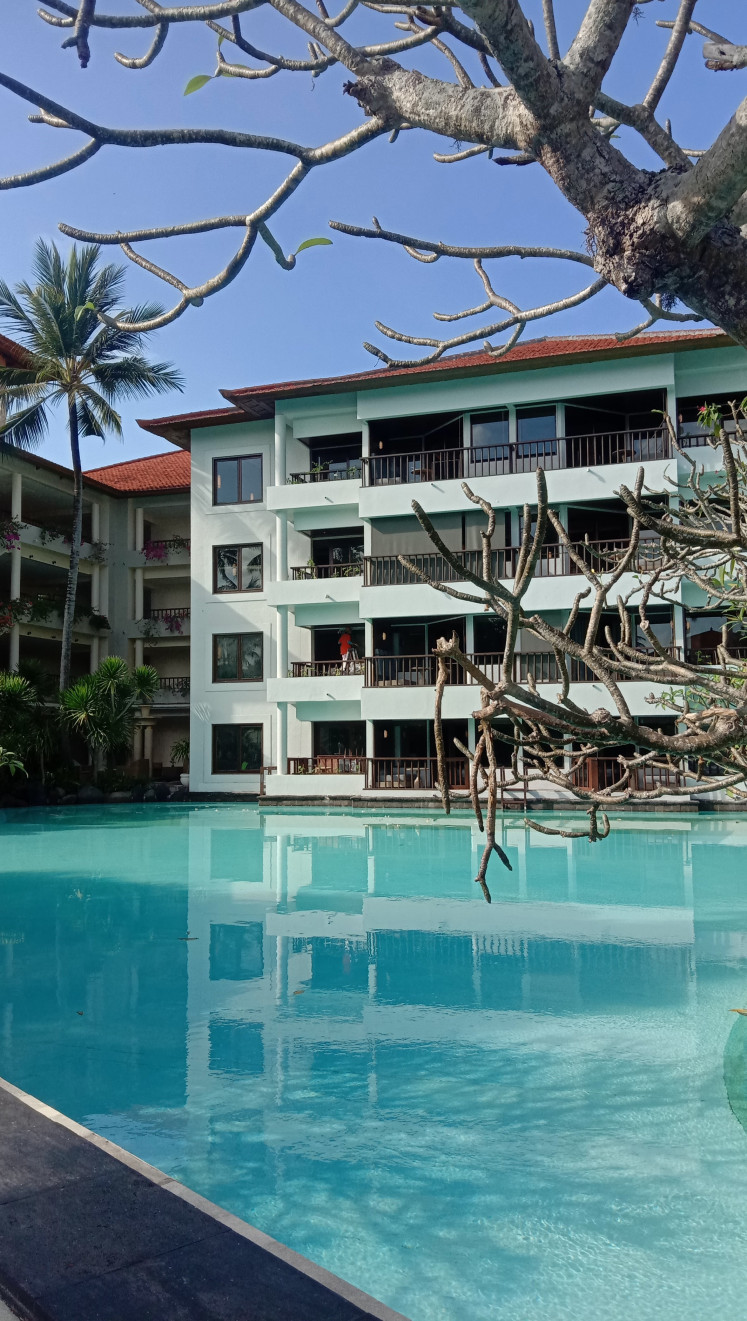 The ylang ylang chandelier at the lobby (./.)

Ramesh Jackson also highlighted The Laguna had the honor of hosting Nelson Mandela when it first opened its doors in 1991 and had since hosted every Indonesian president as well as other dignitaries. With such great renown, it was fitting that the hotel’s restoration would be finished in time for the G20 Bali Summit.

“The opportunity to host a prestigious international event such as the G20 Summit in Bali is incredibly encouraging as we look ahead to the optimistic return and recovery of travel,” said Marriott International’s Asia-Pacific President, Rajeev Menon, in the company’s press release.

Tan explained that the spacious garden lobby represented the soul of the resort. She also recounted that years ago, hotels in Bali were always designed in a square shape. But Laguna was a pioneer in design, and the resort’s design incorporated a lagoon and terraced rice paddies.

“In Bali, every village is different but the centrality of all is this Balinese courtyard,” Tan said, referring to the transformed De Bale lounge and bar.

The Laguna’s restoration was a testament to the long-standing partnership between Marriott International and Rajawali Property Group, she added, saying that the Laguna always had a special place with the group.