The World’s Most Beautiful Cats That Make Great Pets


When it comes to household pets, you are either a dog person or a cat person. Dogs are great animals for those who have the time to play with them on a daily basis. While they are loyal and affectionate creatures, they require a lot of love and care. Cats on the other hand are extremely low maintenance. While they enjoy the attention, most of the time they are happy doing their own thing, only getting needy when they are hungry. That’s why they make great pets. As long as they are fed and get the occasional belly scratch, cats require little care. There are so many different breeds of cats available that it can be hard to know which one to choose. While you want one that is easy to look after, you also want it to look good. That’s why you need to choose from this range of beautiful cats on the market.

You want a cute cat that friends and family are going to enjoy being around. Beautiful cats are plentiful, and with so many different breeds to choose from, we are sure you will be able to find the cat that matches your personality on this list. To help you pick the right cat breed for you, here are the world’s most beautiful cats.

These super cute cats are very popular with pet lovers and for good reason. Not only are they beautiful, with their fluffy coats and small ears, but they have a great temperament. They are playful and curious and enjoy the company of not just people, but other animals. The only downside is they don’t like being left alone. Exotic Shorthair cats make great apartment pets as they are happy to stay in a small space. 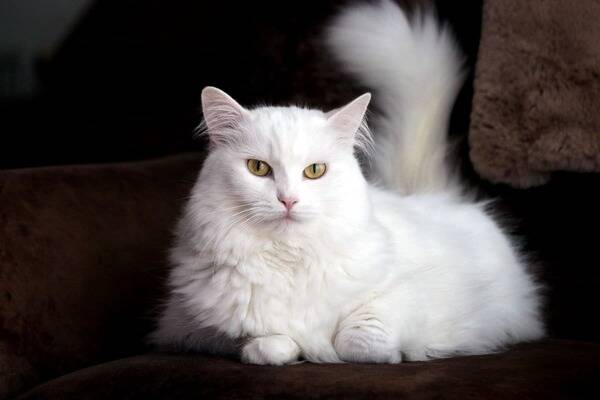 As the name suggests, the Turkish Angora hails from Turkey and is one of the oldest breeds of domestic cats. Believed to have originated somewhere in the 17th century, these four-pawed cats have long hair and silky coats. The pure breeds are white, but you can get other colored Turkish Angora cats as well. They are very intelligent cats with lots of energy who like to be involved with things. This breed likes to find high areas to sit so they can observe what is going on. Like many cats that make great pets, they get along with both humans and animals 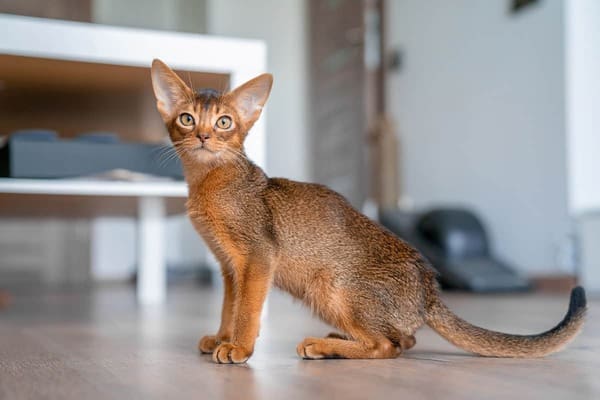 This breed of cat is believed to have originated from Ethiopia and is one of the oldest cats on the planet. The Abyssinians have slender bodies and an elegant look to them that has seen them named the ‘runway models of the feline world.’ They are born with dark coats that usually lighten as they get older. They are whip-smart and love nothing better than exploring. The Abyssinian loves to play, so don’t expect this cat to sit quietly while you go about your business. 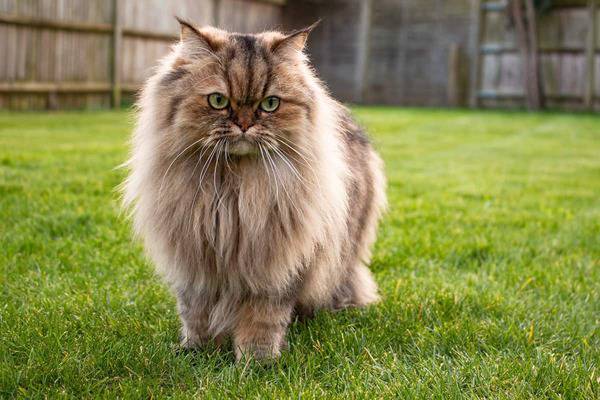 There are a number of sub-breeds of the Persian Cat, but the original is a placid creature with a beautiful thick coat of hair. Because of this, they need to be groomed regularly. They come in a wide range of colors and are generally very chill. Like most cats, they prefer the company of humans but are happy to spend time alone. They are another breed of cat that is very popular with American cat lovers. 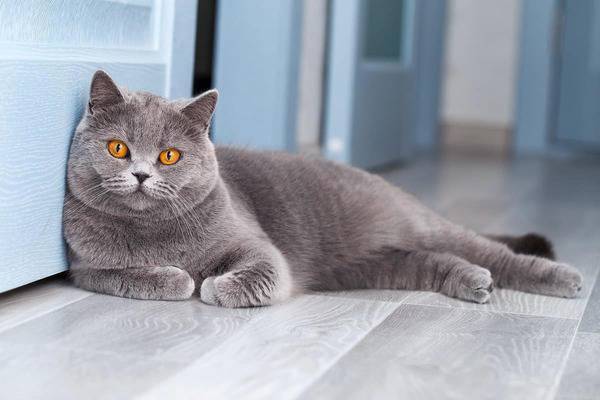 Another ancient cat breed, the British Shorthair is, unsurprisingly, very popular in Britain. When it comes to pedigreed breeds, the British Shorthair leads the way in Britain. This is no doubt thanks to its beautiful appearance. These cats have large, round eyes that match their large ears. Big-bodied and muscular, the British Shorthair has a dense coat of fur with a plush texture. They come in a range of different colors including black, grey, white, and tabby patterns. While they aren’t a big fan of being picked up and handled, they are pretty easygoing and will spend most of their time sleeping or sitting quietly, making them great for those in small apartments. 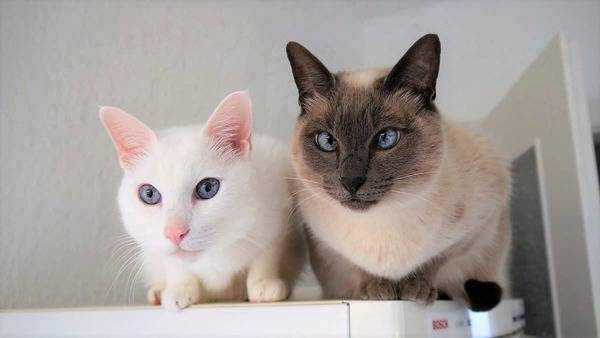 This breed of cat has a royal grace about it. The Siamese Cat has a strong body with a triangle-shaped head that exudes elegance. These classy felines are beautiful cats with white glossy fur and darker-colored faces. They are very social and demanding, requiring lots of attention. That is why many people own two Siamese Cats so they can keep each other company when left alone. 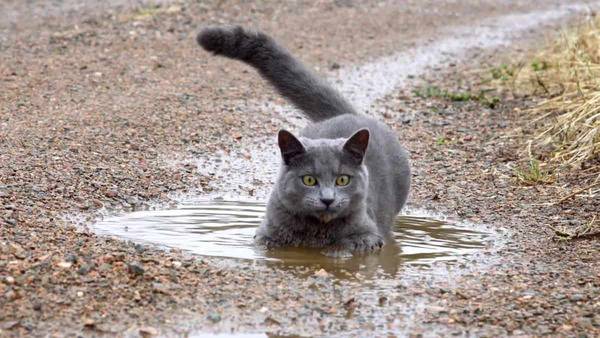 The most notable feature of the graceful Russian Blue is its lush coat. While short, the fur is dense–it has two layers–and is generally a blue-grey color. These cats have bright green eyes that complement their coats. The Russian Blue is intelligent with a great memory. While they are friendly and do enjoy the company of others, they are also just as happy with some peace and quiet. They have been known to do tricks (if you have the patience to teach them) and are good hunters. So expect a few rodents or birds to turn up on your porch every now and again. 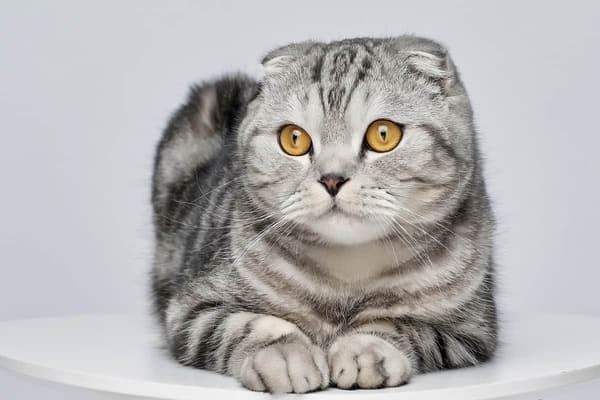 With an owl-like appearance, the Scottish Fold is one cute cat breed. Due to a gene mutation, they have small ears that fold over, which along with their small nose and inquisitive eyes, makes them very beautiful to look at. These cats love getting outside, so a backyard is recommended. Unlike many cat breeds that enjoy their alone time, the Scottish Fold is very affectionate and dislikes being left alone. 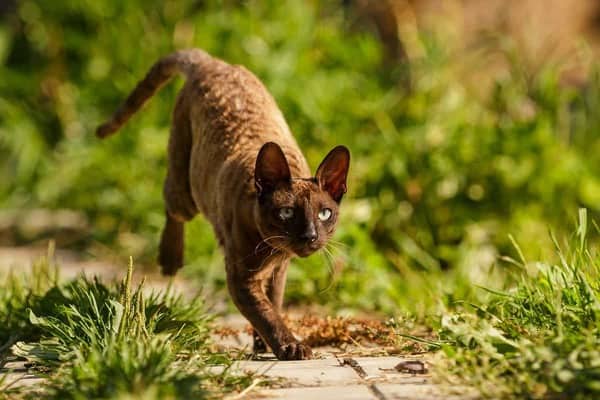 Unlike many cats who have two or three coats of hair, the Cornish Rex only has one. This thin layer of hair gives them a sleek, athletic build that is both striking and beautiful. They are often compared to Greyhounds because of their lean look. As they don’t have much protection from the cold, they prefer living indoors, although they do enjoy getting outside when it’s warm. The Cornish Rex is another playful cat breed that enjoys playing games and exploring. 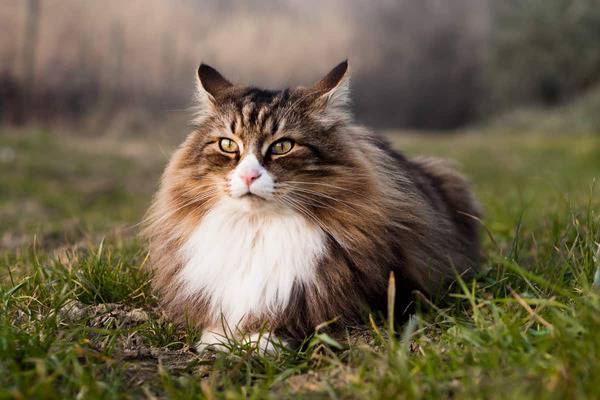 This domesticated European cat has a woolly undercoat to keep it warm during the winter. The topcoat is glossy and water repellent, with the Norwegian Forest Cat also having a big, bushy tail. These cats are larger than your standard pet cat and have sharp claws, which helps them when hunting. They are very playful and suit a family environment. 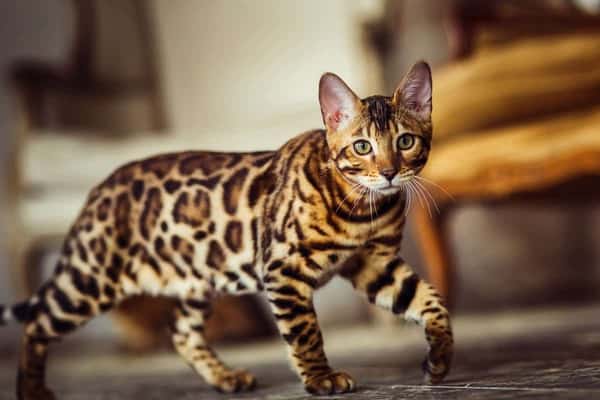 This beautiful cat breed is like having your own miniature leopard, minus the predator instincts. Their shiny coats come in a variety of colors and patterns, but it’s the spotted leopard print that looks most beautiful. The Bengal Cat is very energetic and loves to play. They require lots of attention and need regular exercise. They also have an affinity with water and have no problem getting wet. 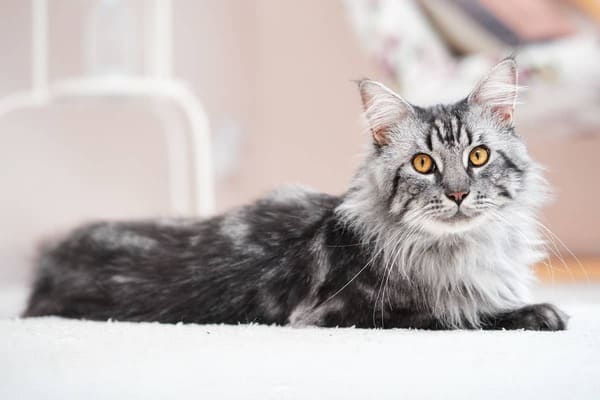 The official state cat of Maine, this large and fluffy cat is very sociable. Possessed with a bushy tail and large paws, the Maine Coon is ideal for anyone living in colder parts of the world. Known as gentle giants, these easy-to-train cats generally get along with everyone, both human and animal. They have a curiosity about water and can be quite vocal, so if you’re after the silent type you might need to look elsewhere. The Maine Coon is a big, beautiful pussy cat and makes a great pet. 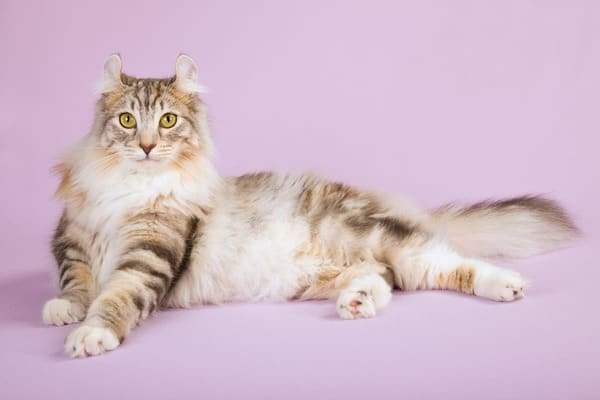 Despite its name, the American Curl is found across the globe. A breed of cat that began as a stray, the American Curl has the look of your everyday domestic cat, except for its curling ears, giving it a cute appeal. Personality-wise they are accepting of most humans and animals and enjoy hanging around their owners, making them perfect household pets. 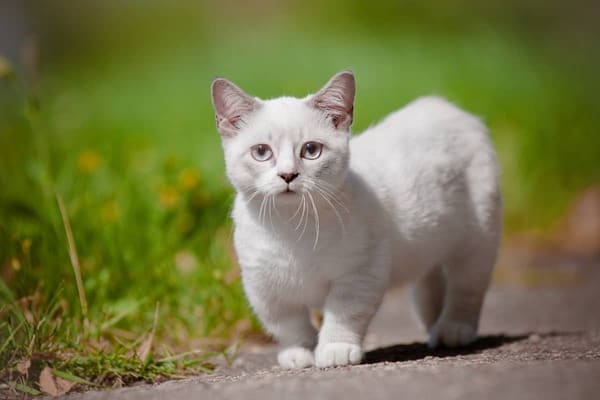 Considered to be the original breed of dwarf cat, the Munchkin Cat has been bred to be slightly smaller than your standard feline. While they have shorter legs, this does not inhibit their ability to jump. They are very cute looking and similar to most cats, are reasonably intelligent, and enjoy playing with their owners.