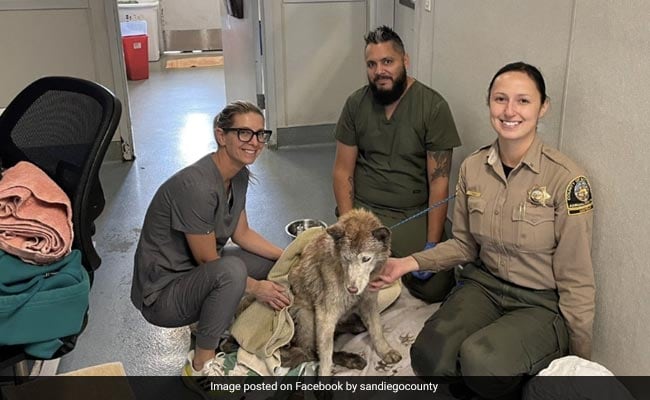 The officers safely lifted Mia out of the well

On Tuesday, an 11-year-old dog was rescued from an oil-filled mechanic’s well and reunited with its pet parents by the San Diego County Department of Animal Services. The dog had fallen into a well located inside a private garage in Ramona. Soon after, the owner of the shop called the Department of Animal Services Tuesday morning saying a dog was trapped, Fox5 reported.

When the officers arrived, they found Mia, a Siberian Husky mix, about ten feet underground in the hole, trying to escape the oil. The dog had been there for a day, exhausted and weighed down by oil soaking her coat. The officers safely lifted Mia out of the well and took it to Bonita Shelter to clean the oil from its fur and provide medical treatment.

The official Facebook page for San Diego county shared the rescue pictures and wrote, “County Animal Services officers rescued Mia, an 11-year-old Siberian Husky mix from an oil-filled mechanic’s well in a Ramona Garage this morning. She was cleaned up, treated by the County Veterinarian, and reunited with her family this afternoon.”

The Animal Services team scanned Mia and found a microchip which allowed them to reach its family. The family told officers Mia had been missing since Saturday and had escaped by pushing down on a door handle, CBS8 reported. They quickly came to get the dog home.

It is unclear how Mia ended up in a private garage. Mia is expected to make a full recovery with more care from the owner’s personal veterinarian, according to County Animal Services.

As per the County of San Diego Department of Animal Services website, the department caters to “more than 10,500 cats, dogs, livestock and exotic animals each year that are lost, abandoned or neglected”.

The Best Restaurants, Bars And Cafes In Ponsonby, 2022