BOXER Austin “Ammo” Williams walked to the ring with his pet DOG Prince Ziggy before winning his fight.

The American returned on the weekend with victory over Simon Madsen on points after ten rounds.

Williams proved he was not all bark and no bite in the ring but came with backup in the form of his pet pooch.

Ziggy accompanied the middleweight to the ring and got the job done over the distance.

And he is in line to face current British champion Felix Cash, 29, next year. 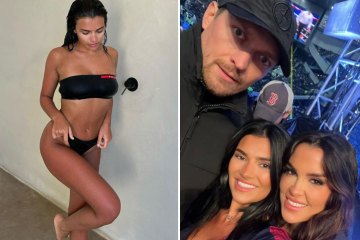 Williams told BoxingScene before beating Madsen: “Knowing that I got Felix Cash next is even more motivating to me.

“It makes this guy [Madsen] even more dangerous to my career.

“He’s now an obstacle in my way of me getting to at least two championship level fights. That brings more fire.

“I’ve worked so hard to get to this level. Now I got this guy who wants to take that all away from me. Now I got an even bigger fire burning.”

JOIN SUN VEGAS: GET A FREE £10 BONUS WITH 100s OF GAMES TO PLAY AND NO DEPOSIT REQUIRED (Ts&Cs apply)

And the iconic rivals opened the door to a FOURTH bout together following 36 thrilling rounds.

Estrada said: “It was a great fight with Gonzalez. We ended the trilogy. Hopefully, we can do a fourth fight.”

Brain Teaser: Find The Value Of House, Cat And Dog In This Math Puzzle

These Birds Form a Trio, but Probably Not a Throuple