What are they? How dangerous are they?


A consumer disputes redressal forum in Gurgaon has ordered the Municipal Corporation of Gurugram (MCG) to ban 11 foreign breeds of pet dogs in the district immediately.

The move comes in the backdrop of the forum awarding a woman attacked by a pet dog in August ₹2 lakh in compensation and several incidents of pet dogs attacking people in Noida and Ghaziabad.

The victim, Munni, who works as a domestic help, was on 10 August attacked by a dog while she was on her way to work with her sister-in-law.

Munni suffered critical injuries on her head and face and was referred from the civil hospital in Gurugram to Delhi’s Safdarjung hospital.

“The MCG is directed to cancel all the licences, if any issued in this regard in favour of the dog owners for keeping the cited breeds with immediate effect and take into its custody the aforesaid dogs,” it added.

Let’s take a closer look at the banned dog breeds and how harmful or harmless they are:

People think pit-bulls are a single breed, but they’re not.

The term for these medium-size dogs with short hair are, refers to an ‘ill-defined’ kind of dog, according to the Animal Foundation website.

Experts consider these dogs far too aggressive to be kept as house pets.

In fact, they have been banned in 30 nations including the UK, France, Australia and New Zealand.

“Pit bulls were bred over hundreds of years for blood sport — for bull and bear baiting, and then for dogfighting. This isn’t an opinion, it’s historical fact. Pit bulls were created to have a killing instinct and a killer bite, to clamp down and to shake, holding onto their victim while being inflicted with physical pain themselves,” this Times Herald piece notes.

According to the American Kennel Club, the Dogo Argentino is a pack-hunting dog instantly identifiable by a short, completely white coat.

It has been bred to chase big game such as wild boar and puma.

The victim in Gurugram was in fact attacked by a Dogo Argentino kept as a pet.

Like the Pit Bull, the Dogo Argentino has been banned in several countries including Ukraine, Australia and New Zealand.

In the United Kingdom, Dogo Argentinos are banned under the Dangerous Dogs Act 1991 unless an owner gets a court exemption.

As per Brittanica, Rottweilers are thought to be descendants of cattle-driving dogs left by the Roman soldiers near Germany’s Rottweil during the 2nd Century CE.

Stories of Rottweilers attacks have hit the headlines with some frequency over the past couple of years.

Experts say these dogs are fiercely loyal, but gravely misunderstood.

As Mini Vasudevan, an animal activist and founder of Humane Animal Society, told The Times of India, “For many, their dark and sturdy features can come across as a bit terrifying. But I would say that Rottweilers are a breed that is gravely misunderstood. Rotts can be fiercely loyal to the family.” A Soundararajan, who has had 20 years of experience in Dog Squad, Coimbatore City Police, added. “Rottweilers are ferocious breeds, especially the ones abroad, which is why they are banned in many countries. They are aggressive dogs with powerful jaws and they have the tendency to not release their victims from their hold. They need to be trained from a very young age to acclimate themselves to their surroundings.”

These dogs are banned in Ecuador, France, Israel, Italy, Portugal, Romania, Russia, Spain, Ukraine, and in many US states, as per the newspaper.

According to the American Kennel Club, these dogs, were bred over centuries to guard estates and homes in the Neapolitan area in the south of Italy.

They have an impeccable lineage – tracing their ancestors back to Molossus, the breed that resulted from Macedonian war dogs crossing with short-haired Indian dogs during the age of Alexander the Great.

The Romans then bred the British mastiffs with the Molossus dogs to create these ‘mastini’ (Italian for mastiffs) which spread further.

According to Petfinder.com, this breed remained virtually unknown until a chance sighting at a Naples dog show in 1946.

Neapolitan Mastiffs can be aggressive if they aren’t socialised early, according to the website Mastiffguide.

They can also be dangerous around small children given their size and also be aggressive if they perceive a threat to themselves or their owners.

A New Zealand judge in 2020 ordered two mastiffs who attacked two women on a residential street within half an hour to be put down, according to the New Zealand Herald.

According to DailyPaws.com, these dogs originated in South Africa where they were kept to guard farms.

These dogs are considered intelligent, loyal and loving.

Though they can grow up to 90 kilos, they are said to be gentle giants.

“They are big babies at home, loyal to their family, and so good with children,” boerboel breeder Danny Jones told the website. “They are really affectionate.”

However, experts say these dogs are best suited for ‘experienced’ dog owners.

This large-sized breed came from the Canary Islands – perhaps from Spanish Conquistadors – where they worked with livestock and as guardians of farms, as per the website Dogtime.com

While they are strong and fiercely loyal, their aggressive nature has led to some using them in dogfighting. 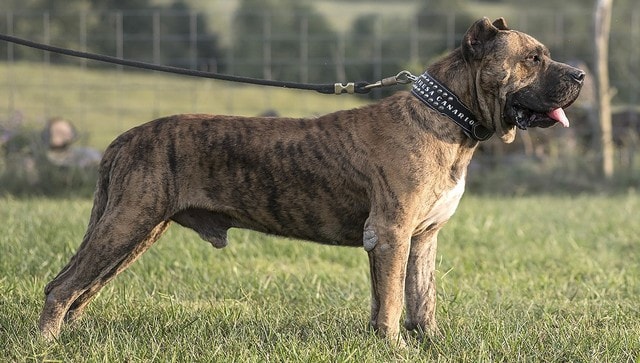 Their popularity waned in the 1940s when dogfighting was prohibited, but made a comeback in the 1980s after breeders in Tenerife made a concerted effort to revive the breed.

Experts also recommend a ‘strong and experienced training hand’ for this breed.

Households with small children or other domestic animals should avoid it due to their “prey drive.”

As per the website The Spruce Pets, a wolf dog is a cross between a domesticated dog and a wolf.

This large breed is fairly controversial due to the fact that they retain the instincts of their undomesticated relatives.

They have been described as ‘headstrong, aggressive and downright ferocious’.

They also require kilos of raw meat every day.

They are banned in several countries as they are considered dangerous to people and other domestic pets.

As per Viovet.co.uk, Bandogs are thought to have been bred in Middle England around 1250-1300.

They count the American Pit Bull Terrier and the Neapolitan Mastiff as their ancestors though other dogs including  early Bullenbeissers and crossed breeds used in the Crusades may have also contributed to their creation.

They were primarily used to hunt, fight and guard property.

While they are temperamentally loyal and protective, they are considered inappropriate for novice owners.

They can weigh as much as 63 kilos.

An American Bulldog is technically a pitbull, since the breed’s ancestors are bulldogs, as per the website Be Chewy.com. But American Bulldogs aren’t American Pit Bull Terriers, even though they have a similar look and build.

They are considered best fits for ‘pet parents’ with an active lifestyle.

They are also considered friendly to other breeds and children if they have been socialised from a young age.

The Fila Brasileiro is a giant guard dog breed from Brazil.

The Continental Club USA website states that these dogs owe their ancestry to the bloodhound, mastiff, Portuguese Mastiff, and the now extinct Bullenbeiser.

These dogs weren’t considered a “breed” until the first breed standard was written in 1946. The Fila Brasileiro is a large working dog. Image courtesy: By Pleple2000

They are now gaining popularity as a noble guardian dog.

The Fila Brasileiro is nearly unmatched for its loyalty and devotion to its human family.

So much so that Brazil now has a saying, “Faithful as a Fila.”

However, as per The Spruce Pets website, these dogs aren’t for everyone – especially those in urban areas and those that enjoy an active social life.

Ideally, they are suited to living a rural life on a large estate.

As per the website Great Pet Care, this Italian Mastiff was first bred to hunt wild boar and guard property in the 15th Century.

The dog is a giant breed and can weigh up to 54 kilos.

It has a massive head, heavy rectangular body, and a short coat in black, grey, fawn, or red.

It is said to be large, powerful, intelligent, active, and headstrong.

While the breed is fiercely loyal to its family, strangers and other small animals best beware.

The breed is also not recommended for first-time dog owners.

Their ownership is banned in the Netherlands and in many places within the US.

With inputs from agencies

10 Underrated Comics of July 2022 You Should Read